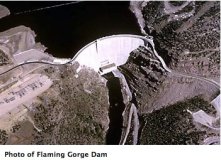 Here’s the release from the US Bureau of Reclamation (Marlon Duke):

Ongoing attention to the Colorado River emphasizes its crucial role as the “lifeblood” that sustains millions of Americans across dozens of cities and countless farms in the American West. For the seven states that comprise the Colorado River Basin—Arizona, California, Colorado, Nevada, New Mexico, Utah and Wyoming—the Colorado River has stimulated growth and opportunity for generations. Today it is as important as ever for leaders, residents and visitors to this beautiful and dynamic region of the country.

Westward migration in the early 20th century made the challenge of gaining beneficial use from the Colorado River’s unpredictable and often destructive flows more urgent. The basin’s seven states struck a historic agreement in 1922 and adopted the cornerstone of today’s “Law of the River,” the Colorado River Compact. The Compact divides the basin into two sections—the Upper Colorado Basin (Colorado, New Mexico, Utah and Wyoming) and the Lower Colorado Basin (Arizona, California and Nevada)—and established that each basin is entitled to 7.5 million acre-feet of Colorado River water annually. It also grants priority entitlement to the lower basin. That entitlement obligates upper basin states to deliver the lower basin’s full allocation as averaged over any rolling 10-year period regardless of annual runoff and hydrology. Follow on negotiations further established minimum objective release criteria wherein an average of at least 8.23 million acre feet is provided to the lower basin annually. Additionally, a 1944 international treaty guarantees 1.5 million acre-feet of Colorado River water to Mexico each year.

As the century progressed, Congress authorized several projects to build dependability into the river’s resource and reduce the risk from its erratic and destructive flows. By the early 1950’s, many federal projects were in place in the lower basin—including the All-American Canal, Laguna Dam, Imperial Dam, Parker Dam, Davis Dam and the iconic Hoover Dam.

In 1956, Congress authorized one of the most extensive and complex river resource development projects in the world, the Colorado River Storage Project. CRSP’s purpose is to allow upper basin states to develop their Colorado River water apportionments while meeting or exceeding required annual water delivery to the lower basin. It accomplishes that through four initial storage units—Wayne N. Aspinall Unit in Colorado (Blue Mesa, Crystal and Morrow Point Dams), Flaming Gorge Dam in Utah, Navajo Dam in New Mexico and Glen Canyon Dam in Arizona—as well as a number of participating projects.

CRSP’s key feature, Glen Canyon Dam and its reservoir, Lake Powell, functions like a savings account of water that can be drawn upon in times of drought. With 26.2 million acre feet of capacity, Lake Powell accounts for more than 86 percent of the 30.6 million acre feet of total storage capacity across CRSP’s four main units. That storage is key to ensuring the upper basin can meet its annual delivery obligation to the lower basin without creating shortages for upper basin states. Additionally, CRSP facilities and participating projects provide other valuable benefits such as hydroelectric power, flood control, agricultural irrigation and recreation.

Despite CRSP’s importance to the West generally and Glen Canyon Dam’s importance to the system specifically, it has been a source of controversy from its earliest stages. Balancing the vital need for water and related resources with an obligation to protect environmental and ecological health poses an increasingly complex challenge. The Bureau of Reclamation manages CRSP and other Colorado River projects to develop and protect water and related resources in an environmentally and economically sound manner for the American public. It works actively with federal, tribal, state, local and non-governmental partners to adaptively manage the river system with attention toward greater societal awareness and the importance of healthy ecosystems—particularly downstream of the dam through Glen and Grand Canyons.

Hydroelectric power generation is a very important CRSP benefit and provides major support to the western power grid. Project facilities can generate enough electricity for nearly 5.8 million customers in seven Western states. Reclamation provides electricity from CRSP facilities to the Western Area Power Administration, which markets and delivers the low-cost, reliable hydropower to a variety of cooperatives, municipalities, tribes, publically owned utilities and state and federal agencies. CRSP facility and project costs—including repayment of initial construction, system upgrades, operation and maintenance—are paid entirely from hydropower electricity sales and transmission revenues, rather than from U.S. taxpayers. In fact, each CRSP project is self-sustaining; costs for facilities within each generating unit are paid by that unit, not shared or covered by other units in the CRSP. Power generation revenues also support recovery and environmental programs within the basin, reduce salinity in the river and rehabilitate local irrigation systems.

It has been 60 years since Congress first authorized CRSP and its facilities continue to fully meet its vision and purpose. Storage provided by Glen Canyon Dam in particular has enabled the upper basin to weather prolonged drought successfully, while making consistent full water deliveries to the lower basin without creating shortages for upper basin states.

As western populations continue to grow, so do the challenges and complexities associated with water management. Facilities like the Glen Canyon Dam have been integral to development across the seven Colorado River Basin states and they will continue to play a vital role in the future of the West.