Click here for all the inside skinny and to register:

Flexible water sharing agreements or alternative transfer methods (ATMs) could help keep water in agriculture while supplies are shared with municipalities or others to meet the many water needs of the state’s population. Colorado’s Water Plan calls for 50,000 acre-feet of water to be identified in ATMs by 2030.

How can Colorado reach its goal and scale up the adoption of alternative transfer methods? Join Water Education Colorado to explore the conversations around existing policy and policy changes that might increase the adoption of ATMs. 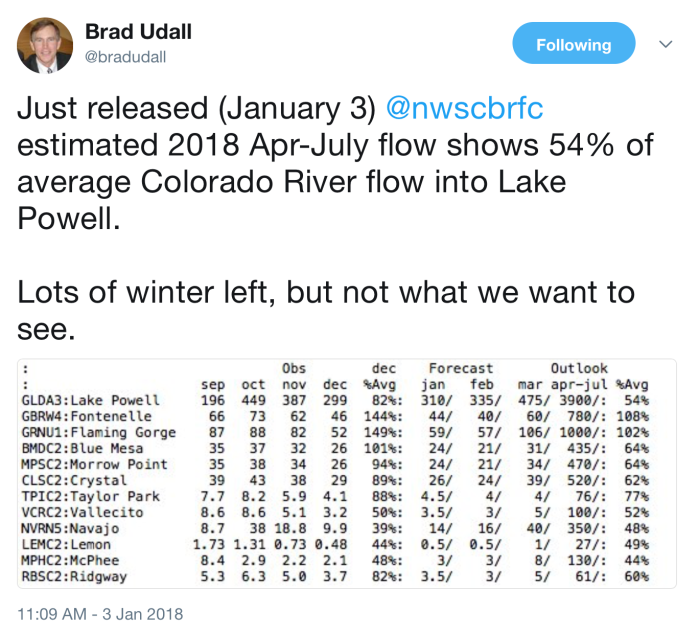 The folks at CBRFC has done a lovely update of their graphical presentation. The story it’s telling right now – not so lovely.

Let’s take this step by step.

First, the green lines in the middle of the graph. Those are “average” for the April-July runoff, where the solid line is the mean, and the dotted line is the median. (UNM WRP students, there’ll probably be a question at some point on the quiz about the difference, and why you’d choose one or the other for policy discussions. Prof. Fleck is just kidding, right?)

But another way, this is really, really bad. Or, as one of the smart managers said in an email this morning, “sobering”.

Here’s the link, so you can join us in clicking obsessively while we worry.

From The Colorado Independent (H20 Radio):

Clouds with a Silver Lining: Seeding Storms to Boost the Colorado River

In much of the West, demand for water is projected to outpace supply, especially in the Colorado River basin, which provides drinking water to over 40 million people. There are various strategies to close the gap–some controversial like building new reservoirs and others more widely accepted like conservation.

But what if you could just wave a magic wand and make it rain or snow? It’s not impossible and in fact, it’s been going on in the West for years.

It’s called weather modification, better known as “cloud seeding.” With a changing climate and drier future, many are looking to the technique to boost snowpack in the mountains to meet growing water needs. More snow, even a small percentage can mean more runoff—and more water to cities and farms.

Back in the fall we drove with Joe Busto from the Colorado Water Conservation Board out of Fraser, Colorado, in the Rocky Mountains to see a cloud seeding operation firsthand—and meet some of the people involved. Busto says they’re trying to “put extra snow in the bank where you need it for water supplies” and that cloud seeding has been shown to add anywhere from 5 to 15 percent to the snowpack.

With us in the car is Maria Pastore, who represents some of those entities that range from Denver Water and Colorado Springs Utilities to ski areas like Winter Park, which we’re not too far from as we drive. For a state with much tension around moving water across the Continental Divide, Pastore says cloud seeding is being embraced by both sides. She says they have a large group of collaborative sponsors, and cloud seeding is probably one of the arguably least contentious programs for the West Slope and East Slope partners.

Pastore’s group works with ski areas for cloud seeding because you get more bang for the buck. They’re already located in places that typically get a lot of snow—and they provide a recreational benefit. After folks have schussed or snowboarded across it, the snow will melt and flow into the tributaries of the Colorado River to become drinking water and to turn turbines in hydroelectric dams.

We arrive at a spot that could pass for a nice campsite. Parked on it is a small camouflage-painted trailer with a twenty-foot mast sticking up in the air—and a barrel on top. Waiting for us by the trailer is Jeff Dean of the Desert Research Institute, or DRI. Dean and his team are at this site to get the cloud seeding equipment, called the generator, ready for the season ahead. So how does cloud seeding work?

Dean explains that cloud seeding is done by adding extra dust to the air. A typical cloud will only drop maybe five percent of its available moisture. They’re not very efficient. Inside every cloud droplet and every snowflake there is a piece of dust—nuclei that started the process. In cloud seeding, they’re just introducing a little bit more of that dust. They do that by burning silver iodide, which goes up in the air to start the growth of a crystal that eventually will turn into a snowflake.

DRI has meteorologists watching several factors like wind speed, humidity, and temperature to identify the perfect moment to fire up the generator to hit their intended target, which in this case is the Winter Park ski area and Denver Water’s drainage.

Dean is out here with us to demonstrate how they start up the equipment. With a tap on his laptop the generator begins to hum. Dean could have been in his office in Reno or on a beach in Maui to activate the system. We watch inside the barrel and after a few seconds a bright yellow, robust flame appears, which indicates that the silver iodide solution is starting to burn. Dean says that last year this generator produced 22 inches of snow for the ski area.

So how do they know it wouldn’t have snowed anyway? They assess that by looking for traces of the silver iodide in the snow. DRI did an analysis at the Winter Park ski area where they went halfway up the lifts and did a full profile all the way to the ground by inserting test tubes every ten centimeters. They then weighed the samples and did a chemical analysis. They found trace amounts of the silver, which according to the state of Colorado, are at extremely low concentrations and not harmful.

The cloud seeding program isn’t just being sponsored by providers in Colorado. Downstream users in other states who depend on a good Rocky Mountain snowpack are also on board. Joe Busto says that after the drought in early 2000s, it was bad in Colorado, but the state rebounded quickly because reservoirs are next to the mountains. But the lower basin states downstream on the Colorado River—Arizona, California, and Nevada—came knocking on the door and said, “Lake Powell and Lake Mead are drying out…”

The result was a partnership among the Southern Nevada Water Authority that serves Las Vegas, the Central Arizona Project, and six agencies in California including the mega-one in L.A. All now help fund cloud seeding in Colorado.

So while recent storms are thrilling skiers, a good base on the slopes this year may also contain a silver lining for water users hundreds of miles away.

Brian Domonkos, snow survey supervisor for the Natural Resources Conservation Service in Colorado, said Tuesday that according to one of the agency’s data sets that goes back 33 years, this is the second-worst start to a snowpack season in that time, with only the 2000 water year being worse.

Water years begin in October of the previous year. Domonkos said that as of the start of January, Colorado typically is about 43 percent of the way through its snowpack accumulation, so it needs well-above-normal snowfall the rest of this season to make up its current deficit…

Said Ben Moyer, a National Weather Service meteorologist in Grand Junction, “The northern mountains have been doing pretty good. They’re still below normal but I think they’re holding up the state for us right now” from a snowpack perspective.

NRCS data Tuesday showed the South Platte River Basin leading the state with snowpack at 86 percent of median. The Upper Colorado was at 69 percent, the Gunnison was at 39 percent and basins in far-southwest Colorado were at just 23 percent.

Moyer said the recent trend has been one of storms coming out of the northwest and across the northern Rockies.

“It creates some glancing blows of winter storms across the northern mountains of Colorado,” he said. “Even those systems have been pretty dry, relatively speaking.”

Moyer said a persistent ridge of high pressure over the West Coast has been blocking storms from coming in from the southwest. The forecast shows that ridge breaking down this weekend, allowing a trough of low pressure to move in late Saturday and into Sunday, bringing some precipitation to the state, he said. He said more snow could arrive around the middle or end of next week.

One promising sign is that late January and early February appear to be a little more active period in terms of precipitation in Colorado in La Niña years, Moyer said…

Domonkos said there still are “way more than a handful of sites” at which the NRCS measures snowpack where less than an inch of snow-water equivalent has been recorded.

The agency’s Mesa Lakes site on the Grand Mesa had just 1.1 inches of snow-water equivalent Tuesday, compared to a Jan. 2 median amount of 6.7 inches. Powderhorn Mountain Resort has been able to operate only on limited terrain so far this season, as has been the case for some other ski areas in the state, including Sunlight Mountain Resort outside Glenwood Springs…