Eagle River Watershed Council has teamed up with the U.S. Forest Service for the inaugural year of our Citizen Science program. This program aims to identify creeks and streams on Forest Service land that currently house populations of native cutthroat trout or could in the future. Participants were trained to collect Environmental DNA samples and assess the physical habitat of streams.

We are no longer accepting new volunteers for the Citizen Science program this year, but there will certainly be ways to get involved in 2016! Email burchenal@erwc.org to sign up for next year or simply to find out more.

While not sponsored by Boulder County, the county has offered to spread the word about the meetings as a way for county residents to come have their questions and concerns addressed by Denver Water staff. As one Denver Water official has stated, “We’re very hopeful that this availability session format allows us to talk more directly with individuals about their concerns.”

Workers pose for a photo in the Moffat Water Tunnel in this 1930 photo. 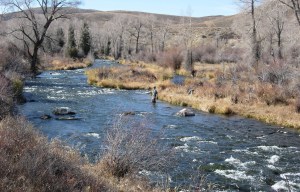 The plan includes environmental enhancements and protections to ensure the Fraser River will be better off with the Moffat Project than without it. 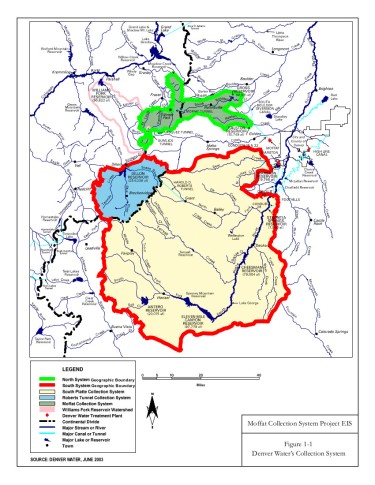 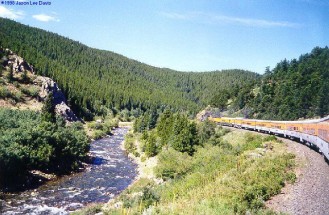 Recently retired from the Colorado Supreme Court, Justice Greg Hobbs joins The Water Values Podcast to share his knowledge of western water law, specifically the doctrine of prior appropriation and its impact on how the West developed. Justice Hobbs uses his deep and broad knowledge of water law to explain how the doctrine of prior appropriation developed, stretching his explanation of water in the West all the way back to the reservoirs the inhabitants of Mesa Verde used and up through the Spanish and Mexican influences in the West. He provides an eye-opening analysis of water law and contrasts differing versions of prior appropriation (Colorado with California; court adjudicated rights versus administratively granted rights). Finally, Justice Hobbs discusses his involvement with the Colorado Foundation for Water Education and its many programs.

I wonder if you can …

The Value of Water Coalition calls for the public to Imagine A Day Without Water from Oct. 6 to 8. Naturally, that got us imagining.

As our veteran staffers brainstormed ways we might tell this story, something started to sound a bit too familiar.

After some research, we realized we were actually more than a decade early to this party.

Ladies and gentlemen, for your viewing pleasure, we present the spectacular (and spectacularly underrated) Denver Water television advertising campaign of 2001.

The Imagine A Day Without Water campaign includes all sorts of events, social media engagement and other creative ideas…

From the League of Women Voters of Larimer County (Sarah Pitts) via the Fort Collins Coloradoan:

As part of its long history of studying and participating in public discussion on water and other environmental issues, the League of Women Voters of Larimer County delivered comments to the Army Corps of Engineers on the second draft environmental impact statement (SDEIS) for the proposed NISP/Glade Reservoir project. The league recommended the Corps defer issuing a permit for the project until the Corps corrects data inadequacies and omissions, addresses compatibility with the draft state water plan, and better defines and quantifies short- and long-term costs related to environmental impacts.

Inadequate data cited by the league include:

•Population growth projections are overstated because they fail to use the reliable and objective data provided by the Colorado State Demography Office.

•Per capita water consumption projections are overstated because they fail to factor in already implemented conservation measures (e.g., Fort Collins reduced per capita consumption from 188 gallons/day in 2003 to 140 now) as well as new and developing conservation initiatives.

The SDEIS fails to analyze the project’s compatibility with the draft Colorado state water plan. It is also at odds with the South Platte River Basin Implementation Plan statement that the costs of building and maintaining reservoirs are questionable: “The basin, in a typical year, has little unappropriated water available for new uses. Unappropriated flows . . . come in sporadic, high peaks during wetter years, making the economics of building a reservoir to capture these supplies questionable because of the large carryover storage requirements.”

Unsubstantiated assumptions about long-term, as well as short term environmental impacts, call into question the SDEIS’s already insufficient disclosure as to the allocation, sources of funding and impact of costs to build and mitigate the effects of the NISP project.

Copies of the league’s full comment letter to the Army Corps of Engineers is available at http://www.lwv-larimercounty.org.

Sarah Pitts is spokeswoman with the League of Women Voters of Larimer County.

Map of the Northern Integrated Supply Project via Northern Water

From The Pueblo Chieftain (Matt Hildner):

A U.S. Bureau of Land Management proposal to expand the Blanca Wetlands could be left in the lurch by the expiration of a congressional conservation fund. Congress failed to renew the authority for the Land and Water Conservation Fund on Wednesday, the end of the federal fiscal year.

The expansion of the wetlands, which is a temporary home for dozens of songbirds and shorebirds that migrate through the San Luis Valley, had been paired with a project by the agency on the Rio Grande Del Norte National Monument.

The White House’s 2016 budget called for $18 million in permanent funding for the project and another $22 million subject to future appropriations by Congress.

Secretary of the Interior Sally Jewell said in a statement that the fund, which draws off revenue from off-shore oil and gas drilling, faced a needlessly uncertain future.

“I’m extremely disappointed that, despite overwhelming bipartisan support, Congress has allowed this innovative and effective program to expire,” she said.

A spokeswoman for Jewell said Interior had given no instruction to the land-management agencies it oversees on whether to pursue other avenues of funding for their projects.

The BLM hoped to expand the wetlands through the purchase of 12,000 acres of private land from willing sellers.

The area targeted for expansion had included wetlands as recently as the 1940s but had dried up from drought or agricultural development.

The agency now maintains habitat at the 8,700-acre Blanca Wetlands by pumping groundwater into the marshes and ponds at the site.

The proposed funding for the national monument, which sits just south of the valley across the New Mexico state line, would have gone toward the protection of cultural and historic sites.

And while Jewell and a host of national conservation groups called for the reauthorization and full funding, many Republican congressmen from the Western U.S. called for reform of the program.

U.S. Rep. Scott Tipton, R-Colo., whose district includes the valley, said those reforms should move the fund away from purchasing more land for federal agencies, although he did not object to its use for land exchanges with willing private landowners.

The fund would be better served by helping federal agencies manage the land they have, Tipton said in a written statement.

“LWCF reauthorization provides an opportunity for reforms that support addressing the growing maintenance backlogs for national parks, roads, trails and facilities,” he said.

Mayor Suthers released his proposed 2016 budget Monday. The big focus will be on storm water. A problem that’s plagued Colorado Springs for years.

The city is setting aside $16 million, with an additional $3 million from Springs Utilities for a total of $19 million.

That plan had some tax payers wondering why isn’t that money going toward the roads.

“There were times I felt like I was going to get pulled over for swerving so much even though it was just because of the pot holes,” Mackenzie Tennison said.

The mayor said through all their surveys, roads were the top priority for voters so he expects them to pass the proposed tax increase of 0.62 percent in November. That will give the city the money it needs to fix our roads.

“You cannot do storm water and roads,” Suthers said. “Storm water is within reach because it’s a relatively less amount of money.”

Suthers added, that unlike previous years, he’s been working with city council on this budget and that nothing about it should surprise them.

The $268.1 million general fund budget is up $9.4 million, or 3.6 percent, but Suthers said that when adjusted for inflation, the city today spends $86 a year less on each resident than it did in 2000…

Suthers’ priority remains the city’s infamously atrocious roads, most of which need overlays or complete reconstruction. But the mayor is banking on passage of a Nov. 3 ballot issue to provide $50 million a year for five years through a 0.62 percent sales tax increase.

The other overriding need is stormwater projects to ameliorate Fountain Creek flooding effects on downstream Pueblo. Past city stormwater funds have been eliminated, and a federal lawsuit has been threatened by the Lower Arkansas Valley Water Conservancy District.

If the issue isn’t addressed, it also could threaten the 1041 permit Colorado Springs Utilities got for its $829 million Southern Delivery System, soon to pump water from Pueblo Reservoir to Colorado Springs, Pueblo West, Fountain and Security.

So Suthers is squeezing $16 million out of the budget, which would be augmented by $3 million from Utilities, for stormwater projects…

Click here to read the Mayor’s news release and letter to City Council — via Pam Zubeck and the Colorado Springs Independent.