Scroll down to read the latest posts from Coyote Gulch.

Please consider attending my presentation, “Climate Change is Water Change,” October 18th in Denver. I will address the 3 questions of the climate crisis: Should we act; Can we act; and, Will we act?

From The Greeley Tribune (Tyler Silvy):

The council will officially vote on the $367 million budget Oct. 17…

The city has a variety of construction projects on the horizon for 2018, but none are more costly than those projects related to water.

Greeley’s portion of a new reservoir will cost $38.2 million, and the city will spend $44.4 million to renovate the Bellvue Water Treatment Plant near the mouth of the Poudre Canyon. Bellvue has been in operation one way or another for more than 100 years.

Water-related projects often are paid for through municipal bonds, and the city’s water department is allowed to take on the debt without a vote of the residents because it is an enterprise fund and can charge more for services to pay down the debt.

This fall, voters in Aspen will decide if they’ll approve $3 million in bonds to purchase land in Woody Creek. City Council intends to buy the land regardless of the outcome of the vote.

The property has been identified as a potential spot for a reservoir. The City of Aspen hopes to move its conditional water rights from Castle and Maroon creeks to this location. City staff has been looking for alternatives to using those rights, which are for water storage in two pristine valleys, and said a reservoir in Woody Creek, near the gravel pit, is the best option.

At a meeting Tuesday, council member Ann Mullins said the city has done its due diligence and should find another financing option if the bond measure does not pass.

The Yampa-White-Green Rivers Basin Round Table is a group of 32 stakeholders from Routt, Moffat and Rio Blanco counties who work on local water issues. Established in 2005 when the Colorado General Assembly passed the Colorado Water Act for the 21st Century and officially beginning 2010 by order of the governor, the Round Table often uses studies, system modeling and projects with the goal of preserving the quantity and quality of water. Their goals include protecting the Y-W-G Basin from the Colorado River Compact curtailment of existing decreed water uses and some increment of future uses, protect and encourage agricultural uses of water in the Y-W-G Basin within the context of private property rights, improve agricultural water supplies to increase irrigated land and reduce shortages, identify and address municipal and industrial water shortages, quantify and protect non-consumptive water uses, maintain and consider the existing natural range of water quality that is necessary for current and anticipated water uses. They also seek to restore, maintain, and modernize water storage and distribution infrastructure while developing an integrated system of water use, storage, administration and delivery to reduce water shortages and meet environmental and recreational needs.

In November the Round Table will need to fill 10 vacancies on their board. Areas that will be open for re-election or new appointments include representatives for recreation, domestic water provider and industrial water user, as well as four at-large representatives plus three individuals or entities who reside outside the basin but own water rights within the basin. Eligibility requirements vary between the positions. Those interested in serving or seeking more information should contact April McIntyre, Round Table Administrative Assistant at 970-985-9924 or mcintyreapril6@gmail.com.

Those who are interested in protecting and directing the future of the Yampa, White and Green River Basins are encouraged to get involved. Changing population distributions and water demands across the west will only serve to raise the level of importance these rivers play making groups like the Round Table ever more vital.

The Colorado River Business Tour, organized by the Hutchins Water Center at Colorado Mesa University and Business for Water Stewardship, attracted about 20 attendees who examined different economic aspects of the river, including tours through peach orchards and irrigation facilities. Participants discussed everything from agriculture to tamarisk and endangered species.

At the Las Colonias site, Grand Junction city Engineering Manager Trent Prall told the group the city is working with project partners to start construction in the first quarter of 2018, and that the parcels north of the Riverfront Trail have been permitted for construction. He said details involving a boat ramp are being worked out with the U.S. Army Corps of Engineers and the U.S. Fish and Wildlife Service.

Bonsai Design CEO Thaddeus Shrader told the group there is one other business owner committed to the project, someone who wants to operate a tap room adjacent to the river, though he declined to provide details. He indicated there is room for one major retail tenant in the development, in addition to the smaller business spaces, and said his company remains the cornerstone tenant in the business park.

Shrader told the group there are a few companies that seem interested in relocating to the business park once it has been built and that proponents are working on several upcoming milestones for the development, one of which is forming a development corporation to handle the leasing for the property…

The Grand Junction Economic Partnership built a website, riverfrontcolorado.com, which invites companies to join the development. Shrader said he and other proponents of the project have been passing out promotional materials to potential tenants as well, including attendees of the Colorado Outdoor Industry Leadership Summit’s inaugural summit in Grand Junction last week.

Craig Mackey, Policy Director of the Business for Water Stewardship, “The goal of this tour today was to get business people from the Grand Valley out looking at water, water systems and how Colorado water applies to the broad economy here in the Grand Valley…

We have quite a bit of water in Colorado now, but that’s not true about the Colorado River Basin, which means the community needs to come together to figure out a solution. 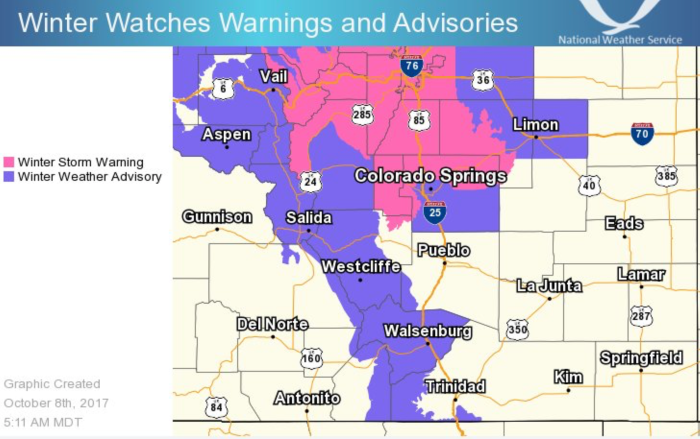 From The North Forty News:

The National Weather Service has issued a winter storm WARNING for areas in Northern Colorado. Accumulations of 3-5 inches along the I25 corridor are expected to start this evening and continue into early Monday morning…

A strong cold front and upper level storm system will move into the area this evening. Temperatures will drop rapidly with the passage of the cold front. Snow will develop over the mountains and higher foothills, with rain developing and spreading south during the evening in lower elevations. Temperatures will turn cold enough for rain to change over to snow across most of the I-25 Corridor towards the midnight hour and then across the eastern plains late Sunday night into early Monday morning…

* WHAT: Heavy snow expected. Some secondary roads and bridges and overpasses may become snow or slush covered. Plan on slow and hazardous travel conditions, including during the morning commute on Monday. Total snow accumulations of 4 to 7 inches are expected, heaviest amounts near the foothills.