By Heather Sackett, Aspen Journalism
EAGLE — The Eagle River Watershed Council is moving ahead with an environmental and recreational needs assessment for the Eagle River basin as part of its effort to create an integrated water-management plan for the river and potentially its tributaries.

To do so, the organization is pulling together disparate groups for some difficult conversations about how the river is used — a requirement of the 2015 Colorado Water Plan.

“We decided the time is right to call all the people into the room,” said Holly Loff, executive director of the Watershed Council.

The Eagle-based nonprofit organization wrapped up meetings last week with representatives from stakeholder groups such as river guides, private land owners, conservation groups, local governments, federal and state agencies, ranchers, water commissioners and trans-mountain diverters in the Eagle River basin, which include the cities of Aurora and Colorado Springs. Representatives from each of the groups are scheduled to participate in a joint meeting this week.

The goal of the talks is to understand the concerns of stakeholders, which will help develop the objectives for the integrated water-management plan. Such plans are also often called “stream management plans.”

In addition to input from stakeholders, a study of the Eagle River basin is also compiling previously collected water-quality data. This information will guide future river-management efforts, as well as permitting and approval processes for future water projects. Loff described the project to members of the Colorado Basin Roundtable on Monday, Sept. 25, at a meeting near Kremmling.

Loff said the study area would include the length of the Eagle River, from its headwaters at Tennessee Pass to its confluence with the Colorado River at Dotsero. And the two-year planning effort will include a look at the prospect of additional storage in the river basin, as envisioned by a project described in the Eagle River Memorandum of Understanding, which includes a potential new reservoir on lower Homestake Creek below the existing Homestake Reservoir.

The Eagle River watershed plan, which was drafted in 2013 by the Watershed Council, lacks an understanding of environmental and recreational water needs, Loff said, a void the new effort seeks to fill. Carbondale-based Lotic Hydrological will be the hydrological consultant on the project and will perform field data collection and analysis.

The 2013 plans noted that “significant concerns were voiced” about conditions of streams in the Eagle River basin, including “continued impacts from mining, damage to riparian habitats, increasing demands for water, the lack of adequate in-basin storage, impacts from untreated urban and road runoff, the possibility of climate change and the prospect for future population growth and development.”

In addition to its work with various local stakeholder groups, the Watershed Council will soon be seeking input from residents of the Eagle River basin about its river-management plan.

“We do want this to be something the community feels they have a voice in,” Loff said. “The community will most certainly be asked to be involved.”

The Boulder-based River Network has selected the Watershed Council as one of four organizations in Colorado to receive direct support and assistance in applying for state funding of the project.

Loff said funding for the study would come from the Colorado Watershed Restoration Program, which is overseen by the Colorado Water Conservation Board, with matching funds coming from a variety of sources, including stakeholders. But it is too soon to put a price tag on the project. Loff said the current process with stakeholder groups is helping to determine the scope of work. Only then can the Eagle River Watershed Council create a budget.

“It is unfortunate that we don’t have the scope, objectives or budget complete yet, but when you consider the fact that those are being established with the help of all of the stakeholders from the various groups, I think most would agree that it is the best approach and a good investment of time if we want this to be a strong plan with buy-in from all parties,” Loff said.

Plans for other rivers

The Middle Colorado Watershed Council, for example, is working on a river management plan for 75 miles of the Colorado River from above Glenwood Canyon to DeBeque, according to the council’s executive director, Laurie Rink, who also briefed the members of the Colorado Basin Roundtable on Sept. 25. The plan will also include tributaries to the river along that stretch, but not the Roaring Fork River, which flows into the Colorado in Glenwood Springs, as the Roaring Fork Conservancy has previously studied it.

Link said Middle Colorado Council’s effort was also “very much a stakeholder driven process” and that there would be a “very heavy push on stakeholder agreements” as part of the planning process. Rink also said that her group’s aim is to eventually thread together the various river-management plans being developed in the Upper Colorado River basin, including the Eagle River plan.

In the Roaring Fork River basin, City of Aspen officials and a technical advisory group are working on a management plan for the upper reaches of that river above its confluence with Brush Creek, which flows out of Snowmass Village.

Aspen’s technical advisory group is made up of roughly 25 stakeholders and includes Pitkin County officials, the Roaring Fork Conservancy, Trout Unlimited, Colorado Parks and Wildlife and the Salvation Ditch Company, among others.

April Long, an engineer for the City of Aspen whose title is “clean river program manager,” is overseeing the Roaring Fork River management plan. Long said the group met twice during the summer. The meetings with the technical advisors were not open to the public, but Long said the city will seek public feedback as the plan progresses.

Lotic Hydrological is also the consultant on the Roaring Fork plan. Long said officials are using a hydrological simulation computer model, as well as historical data from river gauges, to predict and evaluate different flow scenarios with and without certain diversions.

“You can turn those diversions on or off and see how the river responds when you manage flows differently,” Long said about the model, and can ask, “If you wanted a certain type of ecosystem, what sort of flow do you need?”

Long expects a draft plan of the Roaring Fork River plan to be released in late November.

Editor’s note: Aspen Journalism is collaborating with the Vail Daily, the Summit Daily News, the Glenwood Springs Post Independent and The Aspen Times on coverage of rivers and water. The Vail Daily published this story on Saturday, Oct. 7, 2017. The Glenwood Post published the story in its print version on Monday, Oct. 9. 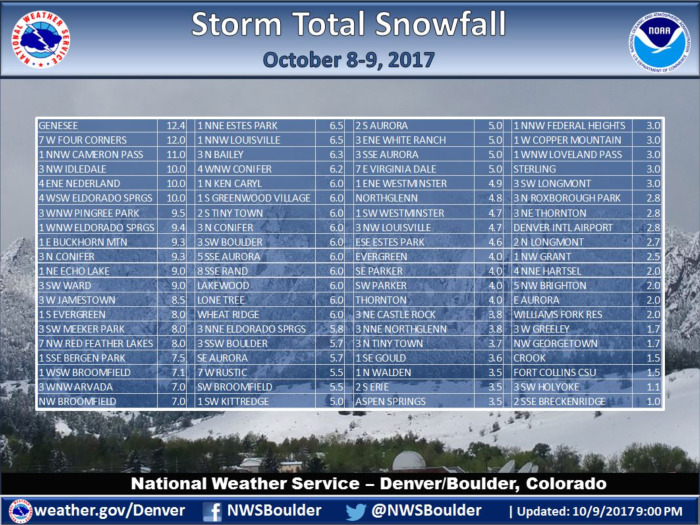 Responsible for the distribution of drinking water to 1.4 million people, Denver Water says snowfall is always a welcome sight.

But while snow is always better than no snow, they say it’s important to remember how quickly things can change.

October 2016 saw the driest October on record in the Denver Water collection system with no snow accumulation until November 17th. Nevertheless, heavy snowfall the rest of the season led to a summer of full reservoirs.

Denver Water says the lesson of 2016 is that the snowfall season is impossible to predict.

According to the lawsuit, the Department of Interior’s Bureau of Reclamation, which operates the dam, made the call to release a massive amount of water from the dam to protect its integrity, as it overflowed with floodwater from a heavy storm that continued to dump water on Sept. 12, 2013.

The plaintiffs in the suit say had they been warned of the massive release, they would have been able to move some of their property, but instead they were surprised to find homes literally washed away.

Details revealed in the lawsuit confirms the victims lost their homes and businesses in the flood, and are seeking compensation from the government for their losses.

The victims and their attorney requested a jury trial to judge all issues laid out in the suit, however the trial has not yet been scheduled.

From the Ag Journal (Candace Krebs):

[Kevin] Niles was among more than 40 participants who attended a recent Colorado Ag Water Alliance tour in hopes of taking home new ideas.

He was particularly interested in learning about conservation techniques his farmer-members could use to help conserve well use.

Water planners and conservationists from outside of the region also participated in the tour.

Beverly Richards, who works for the Gunnison Water Conservancy, knows the ample water supplies in her district would be the envy of most farmers in Eastern Colorado. Still, she sees competition for water increasing downstream in the Grand Valley and beyond and wants to prepare the district for the drought years that are sure to come.

In fact, the district has started writing a water plan, modeled on the state planning exercise that was completed a couple of years ago.

Richards said by coming to a region where water is already scarce, she hoped get some ideas about how to work collaboratively to address future water allocation…

Carla Hendrickson and Ian Hartley didn’t have far to travel. They are both from Pueblo West.

While involved in various boards and community organizations, they said what drew them was a personal quest to better understand the state’s water issues…

Her grandfather was an engineer for Denver Water and helped to build some of the early transfer tunnels that supply the city. Fast-forward to today, and she’s interested in learning about household conservation practices like gray-water storage and reuse…

Several participants said they were hoping to bridge what they see as an urban-rural divide.

“I have a lot of interaction with urban water users, but I want to develop better messaging so that I can talk to my audience about what farmers are doing,” said Kristin Green, the Front Range field manager for Conservation Colorado, based in Denver.