Skip to content
HomeFountain Creek: “They’re selfish and the vote shows they don’t care about their neighbors downstream” — Jay Winner 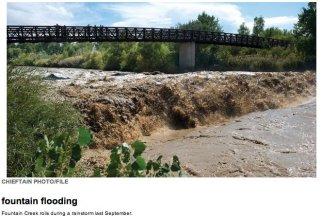 Fountain Creek flood debris May 2014 via The Pueblo Chieftain 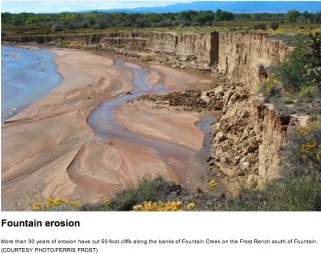 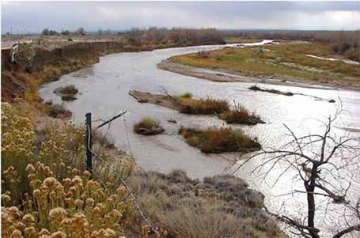 Pueblo County officials are considering legal options after a two-year effort to form an El Paso County drainage authority for Fountain Creek went down the drain Tuesday. Particularly irritating for them was the decision by voters to approve keeping $2 million in tax money for parks while rejecting a plan to fund more than $700 million in flood control backlog.

“They may develop some nice parks, and hopefully they’ll have water to put on those parks,” said Jay Winner, general manager of the Lower Arkansas Valley Water Conservancy District. “They’re selfish and the vote shows they don’t care about their neighbors downstream. The vote on Tuesday was very divisive to Southern Colorado.”

The vote could have repercussions for the Southern Delivery System, an $841 million water pipeline from Pueblo Dam to Colorado Springs.

“Colorado Springs and its voters have not been supportive of finding and funding solutions for flood control on Fountain Creek throughout the discussions about Southern Delivery System,” said Pueblo Chieftain Publisher and Editor Bob Rawlings. “It should not have been built and should not be turned on until those questions are answered.”

The Lower Ark District voted last year to sue the Bureau of Reclamation over its approval of the SDS contract despite the lack of a steady stream of funding for stormwater, which Colorado Springs had indicated was in place during a study. The district asked for a supplemental study monitoring SDS impacts without stormwater funding in place. The lawsuit was put on hold until after the election.

“We did not want to be blamed for the failure of the stormwater vote,” Winner said. “To me, this is not unexpected. I just don’t think they care.”

The Lower Ark board will consider its legal options at its Nov. 19 meeting.

Pueblo County also will huddle with lawyers on potential violations of its 1041 permit for SDS, which includes stormwater controls. Hart said the county also is concerned about the Reclamation permit for use of Lake Pueblo and a state water quality permit in light of Tuesday’s vote.

“Every conversation we’ve had with our friends to the north has been ‘be patient.’ We told them we would sit back and watch,” Hart said. “Our patience is at an end. In fact it may be gone.”

The other commissioners had similar views.

“They’re obligated legally and morally to control stormwater,” said Commissioner Sal Pace. “If they have to dry up some parks or not pave some streets, they need to figure it out.”

“I would share my dismay with Colorado Springs Council President Keith King (who was quoted on the radio Tuesday night),” said Commissioner Liane “Buffie” McFadyen. “They need to regroup and secure funding for flood control on Fountain Creek. I would add that it’s up to their leadership to inform the voters.”

A two-year effort to get El Paso County rowing in one direction on Fountain Creek flood control fell apart like a sandy bank falling into the stream Tuesday. But Colorado Springs officials have not given up on finding a way to fund flood control.

“I think that it’s unfortunate that the stormwater initiative didn’t pass here in El Paso County, particularly considering the storms, floods and issues we’ve had in the last couple of years,” said Larry Small, a former Colorado Springs council member who now manages the Fountain Creek Watershed Flood Control and Greenway District. “Hopefully the people will become more aware and reconsider the issue at some future point.”

A task force started by Colorado Springs council members and El Paso County commissioners in 2012 became a private organization promoting the Pikes Peak Drainage Authority in this year’s election. But its efforts to promote were counteracted by signs in Colorado Springs front yards that read: “No rain tax.”

Council voted 7-2 and commissioners 5-0 to put the measure on the ballot last summer.

But Colorado Springs Mayor Steve Bach in August issued a proclamation claiming the fee was too high and tied up money for 20 years. He has promoted other ways to fund stormwater control, bundling it with other capital needs. On the day after the election, Bach announced stormwater would be added to the topics at a series of community meetings that will begin next week. In any case, the soonest another election would be held is next April.

“Everything from Mayor Bach to date has grossly underfunded stormwater,” said Pueblo County Commissioner Terry Hart, who added that the county is looking at legal action as a result of the failed vote. “I need to see something concrete.”

Colorado Springs Utilities continues to take the position that the 1041 permit applies to future development, not the historic needs that were listed in the stormwater initiative, said Gary Bostrom, chief of water services. However, Utilities wants to see stormwater control succeed.

“We will remain focused on doing our part to support a longterm solution to fund stormwater infrastructure needs,” Bostrom said. “In addition to our many efforts underway to improve Fountain Creek, Colorado Springs Utilities will continue to work with community leaders to develop a stormwater solution that our residents can support.”