From the Sky-Hi Daily News:

The U.S. Bureau of Reclamation has given its go-ahead to the Windy Gap Firming project which, if brought to fruition, will supply up to 26,000 acre-feet of additional Upper Colorado River water to the Front Range. The delivery system for the Colorado-Big Thompson project includes Windy Gap Reservoir, Lake Granby, Shadow Mountain Reservoir, Grand Lake and the Alva B. Adams Tunnel under Rocky Mountain National Park.

Look for more details next week in the Sky-Hi News and at http://www.skyhidailynews.com. Following are excerpts from the press release about the decision from by the Bureau of Reclamation:

“The Windy Gap Firming Project is an exceptional example of the federal government working with our partners to get big things done,” said Ryan. “This project represents an immense effort from a diverse group of stakeholders who pulled together and created a workable project that provides benefits to the people of Colorado and the nation.”

The signing of the ROD culminates a years-long effort by multiple water providers to increase the reliability of, or “firm,” the Windy Gap Project water supply, increasing reliable annual yield from zero to approximately 26,000 acre-feet. …

The project potentially entails construction of a 90,000 acre-foot water storage reservoir, Chimney Hollow, south of Flatiron Reservoir on the East Slope, to provide more reliable water deliveries to Colorado’s Front Range communities and industry. The construction of Chimney Hollow Reservoir will also provide additional recreational opportunities that would be developed and managed by Larimer County.

“The process outcome is what all future water projects should be based on,” the Grand County Commissioners said in a statement. “We believe that consultation with Grand County during the 2014 contract negotiations is an indication of Reclamation’s commitment to open decision-making on matters involving operations of the Colorado-Big Thompson Project.”

The estimated total construction cost for Chimney Hollow Reservoir and associated facilities is $223 million (in 2005 dollars) for the dam, reservoir, appurtenances and conveyance facilities. It is estimated that Chimney Hollow could be operational in five to seven years.

To view the Record of Decision, Final Environmental Impact Statement and other associated documents, visit: http://www.usbr.gov/gp/ecao/nepa/windy_gap.html.

From The Greeley Tribune (Kayla Young):

The future of water storage for Greeley and several other northern Colorado municipalities became a little more clear on Friday.

The Windy Gap Firming Project hit a historic milestone with the signing of its long-awaited record of decision at the Northern Water headquarters here.

Officials from Northern Water and the Bureau of Reclamation also signed a new contract to allow Windy Gap water to be transported from the Western Slope to Chimney Hollow Reservoir, to be located southwest of Loveland, through the Colorado Big Thompson Project infrastructure.

“For the participants in this project that have worked so tirelessly over a number of years to make today a reality, today the development of construction of the Windy Gap project has taken one significant step toward reality,” said Northern Water’s general manager, Erik Wilkinson.

The signing concludes 11 years of efforts and six years of negotiations to establish Chimney Gap Reservoir as the preferred alternative for the Windy Gap project. Once built, the reservoir will hold 90,000 acre-feet of water for 13 participating municipalities and water districts on the Front Range. The Windy Gap Firming Project will provide 26,000 acre-feet of water a year to the project to supply northeastern Colorado.

Although Friday’s signing marks a significant step forward in the project, several key steps remain, including certification on water quality, permitting from the Board of Engineers and the actual construction of the project. Construction is expected to begin on Chimney Hollow Reservoir in 2018.

Burt Knight, water and sewer director for Greeley, one of the top participants in the project with 4,400 acre-feet, recognized the signing as an important step forward in securing the city’s water assets.

“This strengthens our supply portfolio. We get water from four different basins. This strengthens our water that comes from the Western Slope and actually helps us with our reuse and irrigation side of the system, since this water can be reused over and over,” Knight said.

While the interests of the Front Range and Western Slope were often at odds during negotiations, Grand County Manager Lurline Curran said the relationships built during discussions were ultimately what allowed the project to move forward.

“I believe these negotiations have set a precedence on how water projects should be done in the future, not just here in Grand County but in the whole West,” she said.

Mike Applegate, president of Northern Water’s board of directors, said the project provides benefits to both sides of the divide.

“It’s one where there were definitely some tough negotiations but both sides listened to each other. Both sides got something out of the agreements. We’ve made the river better than it has been in a long time over in the Colorado River Basin,” he said.

He pointed to the importance of the plan statewide and its role in the recently released Colorado Water Plan draft.

“This project is recognized even in the Colorado Water Plan as critical for the future of the region, a project that really needs to get built if we really want to protect agriculture in the South Platte Basin,” Applegate said. “These communities that are signed up for this, they have the need right now, so we need to get this project built and get it working.”

James Eklund, director of the Colorado Water Conservation Board, said that much like the state water plan, this step forward on the Windy Gap Firming Project has been a long time coming.

“It’s really indicative of something you’ll find in the draft plan, that we, in this very board room, approved sending to the governor’s office last week. What that is, is this idea that there is a path for projects that involve water from the West Slope to the East Slope that are win-win type projects, that it’s not a situation where it’s a zero sum game,” he said.

From the Longmont Times-Call (Karen Antonacci):

The new Chimney Hollow Reservoir, which is expected to be complete in five to seven years, will allow member communities to store water during wet years.

While many Front Range cities and water districts get their water from the Windy Gap project near Lake Granby, water from Windy Gap can be pumped to the communities only in a year that’s not too dry or not too wet.

Too dry and there’s not enough water to pump. Too wet, and the water pumped to Lake Granby fills the lake past capacity and it just flows back to Windy Gap. The proposed Chimney Hollow reservoir could fix this problem, holding water in wet years to use in dry years.

The 31,575-acre-feet reservoir just west of Cater Lake will cost an estimated $273 million for the dam, reservoir and pumping facilities, according to a Bureau of Reclamation news release.

The federal permitting process for Chimney Hollow began in 2003, culminating Friday as a representative from the U.S. Bureau of Reclamation signed a contract and environmental impact statement as a consortium of county officials, mayors, water district board members and other public officials looked on.

The event celebrated the culmination of not just the permitting process but successful — yet many times contentious — negotiations that went on among entities on both the eastern and western sides of Rocky Mountain National Park. The water must be pumped from Windy Gap to Lake Granby, on the western slope, and then to the Front Range communities on the eastern slope via an underground tunnel already in place.

As the various environmental and other permits were being acquired, negotiations were occurring between entities on the Western and Eastern slopes.

“We didn’t start off in a big group hug,” Greeley Water and Sewer Board Vice Chairman Mick Todd told the group of assembled mayors and water officials Friday.

Dale Rademacher, Longmont’s director of public works and natural resources, said the effort was important for not only Longmont but for all of the other surrounding communities.

“The entire West is water short, and these types of collaborative efforts are going to be important and are going to work for a wide variety of people,” Rademacher said.

Longmont Mayor Dennis Coombs said moving forward with Chimney Hollow is especially exciting for him because Longmont Mayor Ralph Price is the one who filed for water rights for the Windy Gap project in 1967.

“We are standing on the shoulders of some great leaders,” Coombs said. Among the 13 entities sharing use of the future Chimney Hollow reservoir, Longmont will have the third most shares at roughly 16.2 percent. Broomfield will own the most shares at about 18 percent, and Platte River Power Authority will own the second most at about 16.3 percent. The authority provides electricity to Longmont, Estes Park, Loveland and Fort Collins.

“What this really means to us is that it enhances our ability to have a reliable source of energy to serve our communities and that’s really important to us,” Sargent said.

If you missed yesterday’s historic signing ceremony with @usbr you can watch it all online. http://t.co/dAPf4Kzr6c. 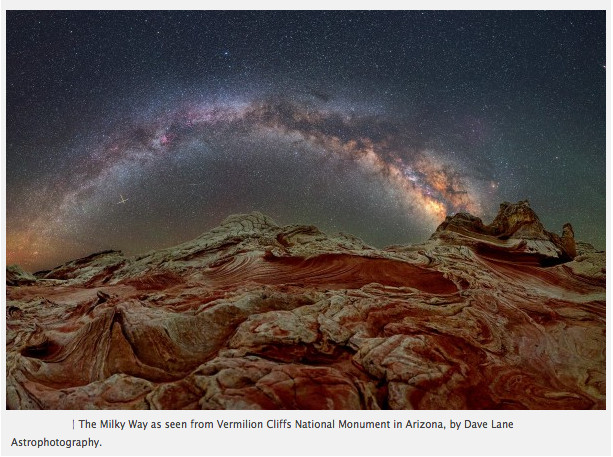 Click here for the inside skinny on the 16-image panorama of the Milky Way arced above a little known area in northern Arizona.