Denver Water has 20 dams, and some are more than 100 years old. We conduct our own internal dam evaluations and also take part in state and federal inspections, which include checking for any mechanical issues and changes in seepage over time.

Concrete dams are expected to last 200 years, and we aim to maintain them so they can safely last even longer. Built in 1932, Eleven Mile had its annual state and internal inspection in May, when the dam received a standard “satisfactory” rating.

With proper maintenance, we can expect this 84-year-old architectural marvel to last well beyond the next century.

I was reminded of this realization this past Easter when my 10-year-old daughter was doing an Easter egg hunt. She knew how many eggs were hidden for her. After about 15 minutes of hunting, she came up to me and said “I can’t find half of my eggs!” I responded, “you need to look harder.” She stopped, looked at me and asked “What does that mean? How do I look harder? Do I scrunch up my eyes and stare at things?” I was amused by… 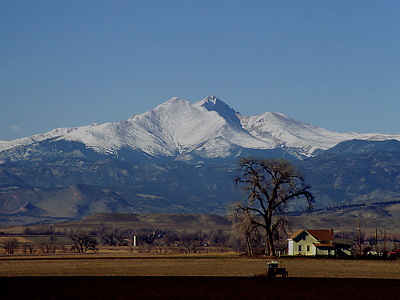 Coloradans are invited to join Lt. Gov. Donna Lynne and other dignitaries at the 140th “Colorado Day” Celebration Ceremony.

The ceremony includes the tolling of the Colorado Liberty Bell, patriotic fanfare, the reading of the Presidential Proclamation from August 1st 1876, and more. To conclude the ceremony, a Howitzer Canon Salute will be provided by the Colorado National Guard – 38 rounds will be fired in honor of Colorado’s entrance in the Union as the 38th state. Admission is free.

The Centennial State first joined the union on Aug. 1, 1876 thanks to Proclamation 230, which was signed by President Ulysses S. Grant. The state is named for the Colorado River, which got its name for the ruddy silt Spanish travelers saw in the water.

At 104,094 square miles, Colorado is the eighth largest state in terms of land – but ranks 22nd in terms of population.

From The Pueblo Chieftain:

Today is Colorado Day, in honor of our beloved Centennial State attaining statehood on Aug. 1, 1876. (That’s 140 years for all of you who don’t have a math app.) To pay tribute to the 38th (and best) state to join the U.S., here is some random Colorado stuff: “I love Colorado. The mountains are so passionate. They just make me want to run to the top and yell obscene things to the valleys below.” — Jocelyn Davies Explorer Zebulon Pike and his men first sighted the majestic mountain that now bears his name when they were near present-day Las Animas on Nov. 15, 1806. Here’s how he described it in his journal: “At two-o’clock I thought I could distinguish a mountain to our right, which appeared like a small blue cloud.”

On his map, he christened it Grand Peak and estimated its elevation as 18,851 feet. The party made an attempt to climb Pikes Peak, but made it no further than Mount Rosa, southeast of the peak, before waistdeep snow, dwindling provisions and inadequate gear forced them to turn back.

Colorado is the highest state in the U.S. — and no, we’re not talking about recreational marijuana use. Colorado’s average elevation: 6,800 feet. Wyoming is second at 6,700 feet and Utah third at 6,100.

Colorado has more 14,000-foot peaks (53, according to 14ers.com) than all the other U.S. states combined — and more than all of Canada, too. And another fun fact: Colorado’s lowest point (3,315 feet on the Kansas border) is higher than the highest point in 20 states.

The geographic center of Colorado is in Park County, roughly 30 miles northwest of Pikes Peak. The nearest town: Hartsel.

In 1991, Colorado chose a state fossil. Do you know what it was? A. Mastodon B. Stegosaurus C. Trilobite D. Allosaurus E. Velociraptor The correct answer is B.

“Colorado is an oasis, an otherworldly mountain place. I’ve played so many shows in Colorado that I think I’m the Colorado house band.” — Brandi Carlile

Feel like chowing down on a cheeseburger and a root beer float? Don’t forget to give Coloradans credit for both.

Louis Ballast, owner and operator of the Humpty Dumpty Barrel Drive-In in Denver, is credited with inventing the cheeseburger. Ballast was so excited by his discovery that he applied for a patent on his cheeseburger “invention” in March 1935. He did not receive a patent but was awarded a trademark on the name “cheeseburger.”

In Cripple Creek, in 1893, a fellow named Frank Wisner floated a scoop of vanilla ice cream in his glass of root beer. Legend has it that he was inspired by seeing the snowy summit of nearby Cow Mountain illuminated by a full moon — and the treat was therefore named a “Black Cow.” Now, of course, it’s simply known as a root beer float. And don’t forget to celebrate on Saturday: It’s National Root Beer Float Day.

At 52.4 square miles, Denver International Airport is the largest airport in the U.S. by total land area. It’s also roughly twice the size of the island of Manhattan.

From the Loveland Reporter-Herald (Saja Hindi):

City of Loveland staff members will ask for approval from the Loveland City Council Tuesday to buy up to an additional 3,000 acre-feet of storage space in the Windy Gap Firming Project.

The meeting will take place at 6 p.m. in the municipal building at 500 E. Third St…

The city of Loveland already has 7,000 acre-feet of storage committed in the project and has an immediate opportunity to buy 2,000 more, each 1,000 requiring an immediate payment of $159,851 to Northern Water, according to a council memo.

“Modeling indicates that this storage acquisition would increase the City’s overall firm yield value, available during drought conditions, by 500 acre-feet,” the memo stated.

Staff members are seeking new resolutions to obtain the 10,000 acre-feet because the ones passed in 2008 were for lesser amounts.

The Loveland Utilities Commission unanimously approved the resolution being recommended to City Council.