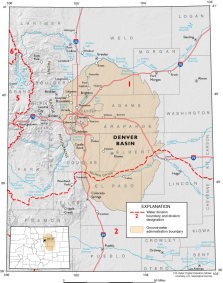 Groundwater movement via the USGS

Last week, county commissioners approved a roughly $272,000 contract with Englewood-based engineering firm Forsgren Associates, Inc., to develop a water master plan. The document, expected to be finished by the end of 2018, will map providers’ water sources and infrastructure, clear the way for water to be considered earlier in the county’s development review process and make forward-thinking recommendations, Dossey said.

As the region’s population increases, so does the demand for water, a dwindling resource in the arid high desert of Colorado’s Front Range and plains. Small, rural districts can’t rely indefinitely on overdrawn aquifers. Nor can they afford massively expensive pipeline projects, such as Utilities’ $825 million Southern Delivery System, or to buy rights to water west of the Continental Divide, where most of the state’s supply is found.

“We’re talking 50 to 100 years out that we’re going to see issues, potentially, with water supply,” Dossey said. “It’s important that the county take the lead and work with each of the providers to work on a plan for the future.”

If water providers in the Colorado Springs vicinity don’t replace existing groundwater sources with more reliable water supplies by 2030, it could result in an annual regional shortfall of up to 25,000 acre-feet, or more than 8 billion gallons, according to Utilities’ Integrated Water Resource Plan, which was approved in February.

“There’s a huge gap to fill if we’re going to continue to grow,” said Dave Doran, a director for the Upper Black Squirrel Creek Ground Water Management District in eastern El Paso County. “There’s just so many more straws in the ground. Inevitably, these aquifers are dropping rapidly.”

Tens of thousands of residents rely on groundwater drawn from the depleting aquifers of the Denver Basin, according to local water officials.

How fast water levels within the Denver Basin aquifers are falling is up for debate. Kip Petersen, general manager for the Donala Water and Sanitation District, believes the aquifers could dwindle to a point where it would no longer be cost-effective for providers to pump water from them within the next 50 years.

“The water that we’re pulling out has been there for millions and millions of years. Once that water’s out, it’s out,” said Petersen, whose district services about 2,800 homes in the Gleneagle area. “That’s the big search right now – how do we offset a declining aquifer like the Denver basin with a renewable source?”

Petersen’s district is one of the few in the county that’s secured renewable water sources, including water rights to a Leadville ranch and Fountain Creek, to serve about a third of its customers, he said.

Utilities’ water resource plan, a roughly $2 million project, explores options for how the agency might help smaller providers fill a supply gap. One possibility would allow the providers to use Utilities’ delivery infrastructure during wetter years when demand falls in Colorado Springs. Another potential solution would involve Utilities selling other entities water to supplement existing resources. But with so-called “regionalization” comes a host of technical and legal challenges. The Utilities Policy Advisory Committee is researching the risks and benefits of working with smaller providers in the Pikes Peak region, said Steve Berry, a Utilities spokesman.