From the Sky-Hi Daily News:

According to the most recent USDA Natural Resources Conservation Service Kremmling Field Office snow surveys, snowpack in the high elevation mountains above Middle Park now ranges from 115 percent to 194 percent of the 30-year average, with the overall average for Middle Park at 141 percent. New record highs were set at both the Granby and Buffalo Park snow courses. At this time last year, the area was only at 75 percent of average. Snow density is averaging 28 percent, which means that for one foot of snow there is only 3.3 inches of water, which NRCS surveyors said is normal for early March.

Water storage levels throughout the state are at 57 percent capacity, according to utilities officials. Although that’s not an ideal number, utilities spokesman Steve Berry said that’s a far cry from where levels were sitting at this time last year.

“Last year we were at about 47 percent capacity, and we were going through a severe drought,” Berry said. “It’s a good jump, and it’s really just below the 30-year average of about 62 percent capacity.”

Although winter temperatures fell into the single and negative digits, an increase in snowfall accumulations in the mountains diminished drought conditions in the region, according to the U.S. Drought Monitor.

According to the National Weather Service’s Winter Review, which summarized weather from Dec. 1to Feb. 28, Colorado Springs received 19.1 inches of snow, which is 2.9 inches above normal…

As of Feb. 28, Pikes Peak snowpack levels were at 52 percent, and Rampart Reservoir at 86 percent, bringing local storage levels to 73 percent, according to utilities records. Additionally, snowpack in the Upper Colorado Basin is at 130 percent of average, and the Arkansas Basin level is at average capacity. 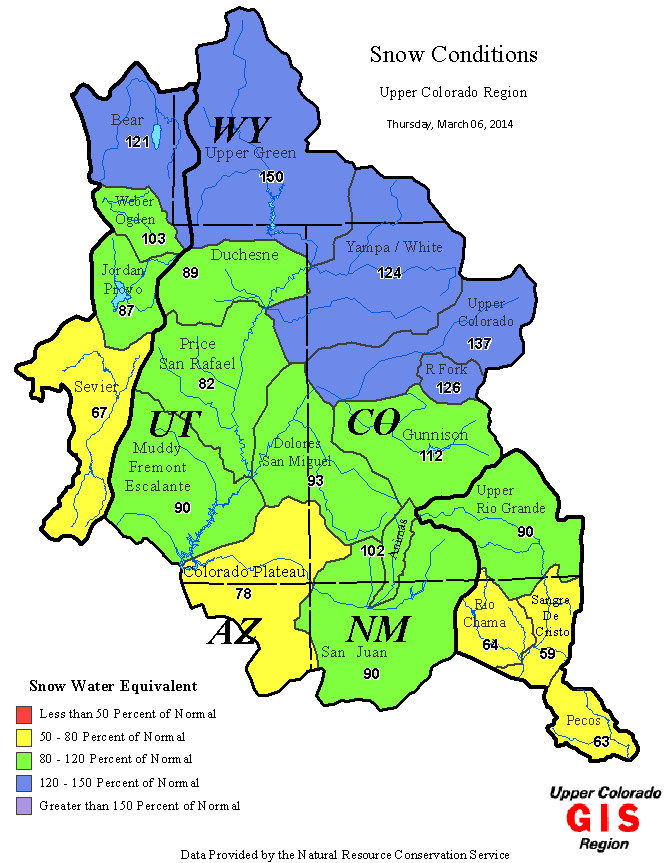 I’m attending the Roundtable Summit today. I intend to live-Tweet the goings on @CoyoteGulch.

From the Colorado Independent (Bob Berwyn):

Ranchers, anglers and big-city water bosses raised a white flag in Colorado’s long-running water wars this week by setting aside bullying and threats of lawsuits and permit appeals. Instead, Grand County and Trout Unlimited have agreed to let Denver Water siphon another 18,000 acre feet from the headwaters of the Colorado River — but only under a strict checklist of requirements designed to ensure the Fraser River recovers from decades of depletion.

The deal announced Tuesday could make the Fraser the most-watched river in Colorado – and maybe in the West. It sets out an innovative, science-based plan that seeks to balance increasing urban needs for water with an imperative to restore crucial habitat for river trout…

Denver Water – Colorado’s biggest and thirstiest water provider — currently diverts more than half the Fraser River’s flow to keep toilets flushing, dishwashers running and sprinklers spouting along the Front Range. The dispute started in 2003 when the utility applied to the U.S. Army Corps of Engineers for the permit it needs to divert more water from the river — as much as three-quarters of its average annual flow — to keep up with growth in the Denver metro area…

This week’s pact seeks to honor Denver Water’s longstanding river rights while ensuring the Fraser will be protected no matter how much more water is diverted for urban use. The restoration plan will use real-time data to track critical temperature increases in key streams caused either by Denver Water’s seasonal diversions or the long-term effects of climate change. When temperatures spike, additional flows will be released to cool the water when needed. In good water years, the deal will give Denver up to 18,000 acre feet of additional water, which will mostly be tapped during the peak spring runoff season. The timing of the diversions is a key part of the utility’s promise to improve the Fraser.

“We’re not going to be diverting water all the time. We won’t divert water in critically dry years, and we’ll only divert water during spring runoff. At other times of year, we’ll put water back into the river and improve conditions,” said Jim Lochhead, Denver Water’s CEO and manager.

The agreement also will require shifts in the timing of the water harvest. High flows are needed in the spring to help flush sediments that gunk up habitat for trout and aquatic bugs…

The Army Corps of Engineers’ final environmental study is due in late April, with a formal decision on the proposed diversion project expected in early 2015.

This week’s pact minimizes the likelihood of a permit appeal or a time-consuming lawsuit by conservationists. That’s important for Denver Water, which is eager to dig its shovels into the ground as soon as possible. Some of the extremely dry years in the early 2000s — especially 2002 — already have put the water giant’s delivery system to the test.

The deal also gives Grand County some assurances that the Fraser will remain a vibrant part of its outdoor recreation economy. Anglers from throughout the state and country visit Grand County to wet their lines in a river that was favored by President Dwight Eisenhower.

The additional water will help Denver Water balance its supplies. Currently, the utility gets about 80 percent of its water through the southern portion of its collection system, from the Blue River in Summit County via the Roberts Tunnel and a chain of reservoirs along the South Platte River. Lochhead says increased diversions from the Fraser River will make urban water supplies less vulnerable to extreme events such as forest fires, which are expected more frequently because of drought and climate change. The ability to pump more water out of the Fraser when needed would give Denver a much-needed back-up plan in case of another massive blaze like the 2002 Hayman Fire in a key watershed…

West Slope water managers acknowledge Denver Water’s legal rights. But they question whether any new trans-divide diversions are needed, claiming that Front Range communities could easily meet existing and future needs with more efficient use of the water the utility already is diverting over the Continental Divide. Under any plan, they say, drawing more water from any Colorado River tributary will have ripple effects felt far downstream, from endangered Colorado River fish near Grand Junction to lettuce growers in the salty deserts near the Mexican border.

Farmers are as certain as farmers can be that this year will be better than the last. All indications at a still early point in the growing season are pointing toward more favorable conditions than farmers have seen in the last three years.

“It’s almost like we’ve been on an extended summer vacation,” mused Dale Mauch, a Lamar farmer and Fort Lyon Canal board member. “It would be so much fun to plant a corn crop again. You’ve got to stay optimistic in this business, if not just for your mental health.”

The Arkansas Valley’s three largest irrigation well-owner groups have submitted plans to the state with varying degrees of optimism, after they were limited in 2013. Pumping levels depend on the availability of surface supplies for augmentation.

The Lower Arkansas Water Management Association wants to pump its irrigation wells at 90 percent capacity, up from 10 percent last year. The group serves the eastern end of the valley.

“Everyone is looking forward to planting a crop,” said Don Higbee, LAWMA manager.

The Arkansas Groundwater Users Association, which augments wells on Fountain Creek and the area east of Pueblo, is a little more cautious. It plans an initial allocation of about 65 percent for farms, up from 30 percent last year. Municipal and domestic allocation will be 100 percent.

“There’s a good chance of a second allocation if snowpack is 100 percent on May 1,” said AGUA manager Scott Lorenz.

Colorado Water Protective and Development Association, which covers wells throughout the valley, is looking at something less than 65 percent, but better than 2013, when wells without an independent supply were shut down.

“Our numbers are not so good, but better than last year,” said Ann Lopkoff, CWPDA manager. “The Division of Water Resources is going to be able to work with us on a plan this year, and there is more water available. It’s not going to be zero percent again.”

If snowpack remains at high levels, ditches in the Arkansas Valley should see more normal years than the past three seasons, when flows dropped late in the year if they came at all. Commodity prices are down, and cattle herds have been thinned.

Farmers also are dealing with soil moisture deficit that affects crops like grass and alfalfa. Ample irrigation water throughout the season improves the conditions for vegetable crops and corn…

Some indicators that 2014 will be an improvement for farmers:

The National Oceanic and Atmospheric Administration is predicting that chances are good for an El Nino forming over the Pacific Ocean in late summer. Such systems usually mean warmer temperatures and increased rainfall for the Southern United States, including Southern Colorado.

Snowpack was more than 125 percent in the Arkansas River headwaters, which feed the mainstem of the river.

Winter water storage, which runs Nov. 15-March 15, was almost 92,000 acre-feet at the end of February, nearly double last year’s total and 90 percent of the 20-year average

Additional water will be available from the Fryingpan-Arkansas Project, forecast at 40 percent above average as of March 1, and through leases by the Pueblo Board of Water Works.