The thermometer on the wall displays a chilling -36°F as we enter the giant freezer. What could possibly need it to be this cold? The answer– ice cores collected from around the world. 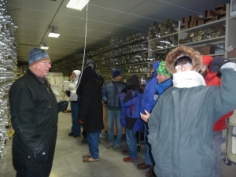 They are stored in the US National Ice Core Laboratory, which I was touring as part of the Colorado Foundation for Water Education’s Climate and Colorado’s Water Future Workshop. The Ice Core Lab is responsible for preserving ice collected from remote locations, such as Greenland, Antarctica, the Andes, and the Himalayas. Scientists drill the ice cores, package them up very carefully, and ship them back to the Ice Core Lab. Here, analysis on the ice provides insight into Earth’s climate. Scientists look at the oxygen isotopes, which are related to the temperature of the clouds… 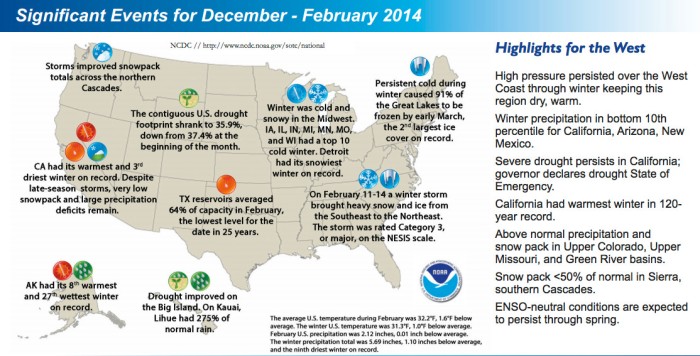 From email from GovTrack.us:

This bill’s text for status Referred to Senate Committee (Mar 24, 2014) is now available.

Grand County is that part of the snow-rich Western Slope most proximate to the farms and cities of the Front Range. It juts like a thumb eastward, the most easterly point of the Pacific drainage in North America.

As such, it became a target, early and often, of transmountain diversions. The first major diversion across the Continental Divide was completed in 1890 and the last, located at Windy Gap, where the Fraser River flows into the Colorado, in 1985. Several others, more audacious in scale, came between.

Taken together, these great engineering achievements annually draw 60 percent or more of the native flows of this headwater region eastward, over and through the Continental Divide. The water delivered to cities between Denver and Fort Collins have made them among the most vibrant in the country, and the water that flows to farms as far east as Julesberg, hundreds of miles away, among the nation’s most productive.

But this achievement has had a hidden cost that became more apparent in recent years. Combined with the frequent drought since 2000, the depletions have left the Colorado River shallow and warm as it flows through Middle Park. It is, according to environmental advocates, a river on the edge of ecological collapse, unable to support sculpin, trout, and other fish…

Now come new efforts, the most recent announced earlier this month, to bring the Colorado River and its tributaries back from this brink.

Called the Mitigation and Enhancement Coordination Plan, the agreement between Denver Water, Grand County, and Trout Unlimited proposes to govern Denver’s incremental diversions through the Continental Divide known as the Moffat firming project. However, according to the architects of the deal, it should also serve as a model in the ongoing dialogue as Colorado’s growing metropolitan areas look to squeeze out the final drops of the state’s entitlements to the Colorado River, as defined by the Colorado River compact of 1922 and other compacts.

“It is a demonstration of a new way of doing business that should be a model as Colorado talks about meeting its water gaps (between demands and supplies),” says Jim Lochhead, chief executive of Denver Water…

David Taussig, a native of Grand County and now the county’s water attorney, working from the 16th Street firm of White & Jankowski in downtown Denver, also sees the agreement as a model. “Nobody knows what (the agreements) will look like, but there are ways to develop things that benefit the Western Slope,” he says.

There are skeptics, unable to explain this strange alchemy in which a river can in any way benefit from having less water, as the agreement insists can be the case.

Among those withholding enthusiasm is Matt Rice, the Colorado coordinator for American Rivers. He points out that the agreement covers just 4 of the 32 creeks and streams trapped by Denver Water in the Fraser Valley and the adjoining Williams Fork. Too, like too many other similar programs, the data collection begins after permits are awarded, not before, which he thinks is backward.

In short, while Denver is careful to talk about “enhancements,” he thinks it falls short of addressing full, cumulative impacts.

Cumulative impacts are likely to be a focal point of federal permitting. While the Environmental Protection Agency is likely to have a voice, the vital 404 permit must come from the U.S. Army Corps of Engineers. The parties to the new agreement have asked that their agreement be incorporated into the permit…

Under terms of this agreement, however, Denver Water is required to spend $10 million in direct costs in Grand County.

A major concern on the Fraser River is higher temperatures caused by more shallow flows, harmful or even deadly to fish. The money would go to such things as temperature-monitoring stations, to track how warm the Fraser is getting in summer months.

In places, creeks and the Fraser River will be rechanneled. A river with 75 percent of its flows diminished over a year’s cycle has less need for width. Instead, it needs a narrower course, to allow more depth and hence the colder water needed for aquatic life. Such work was already started several years ago on a segment near the Safeway store in Fraser.

A far greater financial cost to Denver specified by the agreement is the agency’s commitment to forfeit up to 2,500 acre-feet annually of the city’s added 18,700 acre-foot take…

A final environmental impact statement from the U.S. Army Corps of Engineers is expected in late April. The federal agency can also impose conditions of its own making. They would be included in a record-of-decision, which is expected to be issued in late 2015.

A permit from the Colorado Department of Health and Environment is also needed. Boulder County insists it also has say-so over enlargement of Gross Reservoir, an assertion contested by Denver Water.

In addition, the Federal Energy Regulatory Commission must award a permit for revised hydroelectric generation at Gross.

At earliest, expansion of Gross could start in 2018 and be ready to capture spring runoff in 2022…

Mely Whiting, an attorney for Trout Unlimited, says the new deal builds on both the Colorado River Cooperative Agreement and the Windy Gap settlements. They mesh together and, downstream from Windy Gap, should have great benefit.

The weakness is that in the Fraser Valley, there is little existing baseline data. “We don’t have a very good grasp on either what we have lost or what we may lose in the future,” she says. “We know there have been declines, but don’t have nearly as much information (as below Windy Gap). So the effort will be to develop a strong baseline and get a strong understanding of what is going on up there.”

At the end of the day it is a compromise, and Whiting admits that not all environmentalists are thrilled.

“On my side of the equation, when I talk to people in the conservation community, some people want language that nails Denver to the ground, so that they have no wiggle room. They want things very predictable,” she says.

“This Learning by Doing agreement is not extremely predictable,” she added. “We have some basic parameters. There are three ways we are going to measure, to monitor to make sure the values of the streams aren’t going down.”

“Shoshone is not for sale,” Eggleston told the Colorado River Basin Roundtable, which met Monday in Glenwood Springs, nine miles downstream from the Shoshone plant. “Don’t plan to sell it. Nothing in the future about selling it.”

That may be good news to those on the West Slope who fear a Front Range utility will buy the plant, shut it down, and extinguish the plant’s senior water rights — resulting in less water in the lower Colorado River.

But it also means the plant’s fate is left in the portfolio of Xcel Energy, a regional utility based in Minneapolis that operates 25 other hydro plants, serves 3.4 million electricity customers in eight states, and sees $10.1 billion a year in revenue.

Eggleston’s comments to the members of the Colorado roundtable were in response to an article in The Daily Sentinel of Grand Junction on March 17 about the prospect of the plant being bought by West Slope interests.

The Sentinel story quoted Louis Meyer of SGM Engineering, a consultant developing the Colorado roundtable’s “basin implement plan,” that buying the plant would be “one of the seminal things going forward in our plan.”

The article included several references to the plant not being for sale, and stated there was “no indication for now that the Shoshone Generation Station is even for sale.”

But an Xcel spokesman quoted in the story, Mark Stutz, said he couldn’t comment on whether the plant was for sale, or not.

That left the prospect lingering.

And Eggleston told the roundtable meeting he wanted to clarify any “mis-information.”

“Again, Xcel is not interested in selling,” Eggleston said. “They would not consider any first-right-of-refusals, or anything else that’s not within the interests of Xcel at this time.”

Eggleston said the article in the Sentinel caught the attention of Ben Fowke, the company’s chairman, president and CEO.

“It would be a good idea to do that every two or three years so that the executive management is reminded how important Shoshone is, and that Xcel Energy is making a commitment to everybody on the Western Slope to protect those water rights and operate that plant,” Eggleston said.

The real value of the Shoshone plant to the West Slope is its senior water rights from 1902, which keep up to 1,250 cubic feet per second of water flowing down the Colorado River.

“The whole reason the West Slope, lead by the River District, would be interested in gaining the plant is because we want that water right held intact,” said Jim Pokrandt, a communications and education specialist with the Colorado River District…

Denver Water has long chafed at the restrictions imposed by Shoshone’s water rights, but Travis Thompson, media coordinator for the utility, said via email that “Denver Water has not made an offer to purchase the Shoshone plant over the last few decades, and there are no standing offers.”

Denver Water also drove the framing and adoption of the Colorado River Cooperative Agreement (CRCA), signed in 2012 by a list of regional entities.

“Under the CRCA, if Xcel decides to sell the Shoshone assets, they agree to do so in an open bidding arrangement,” Thompson, said.

He added that if the West Slope wanted to buy the plant, Denver Water also agreed it would support the idea and “assist the West Slope in acquiring Shoshone assets.”

But fear of Front Range water interests is still discernable in the Colorado River basin.

On Monday, Chuck Ogilby, a member of the Colorado roundtable, read a passage from the group’s vision statement: “The Shoshone call shall be preserved and protected for the benefit of the West Slope. This is non-negotiable.”

Here’s a photo essay of the pulse flow from National Geographic (Jennifer Pitt). Be sure to click through for the photographs. Here’s an excerpt:

Someone held a riverbed cleanup there yesterday, and I’ve heard reports that locals have been coming down to the dry channel all day, wondering when the water will arrive. I think it will be there soon!