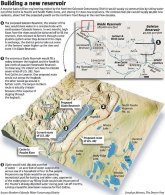 Thank you to all of the presenters and attendees at this year's Summer Conference! Hope to see you all in January. #COWaterRally

From Aspen Journalism (Brent Gardner-Smith) via the Aspen Daily News:

Colorado gubernatorial candidate Bob Beauprez told the Colorado Water Congress Friday that as governor he would be the “lead cheerleader” for new water storage projects in the state. He also drew a distinction between himself and Gov. Hickenlooper on the potential of a major new dam and reservoir project being built in the state.

The governor answered a question on Thursday at the Water Congress meeting in Snowmass Village by saying it was “unlikely” that public opinion in the state had shifted in favor of building a major new water storage project.

“I submit to you that’s not leadership,” said Beauprez. “I think we need a governor that stands up and says we’ve got to build new storage and I’m going to lead the way to make sure it happens. I’ll promote worthy projects. I’ll be your lead cheerleader on that.”

The Water Congress is an advocacy organization whose mission includes the “protection of water rights” and “infrastructure investment.”

Beauprez said he would seek to streamline the approval process for new water projects by asking Congress to pass a resolution exempting Colorado projects from NEPA, which often requires producing an extensive environmental impact statement.

“I’ll seek NEPA waivers for any project that meets the stringent Colorado standards, with the help of our Congressional delegation,” said Beauprez [ed. emphasis mine], a Republican who represented Colorado’s 7th District on the Front Range from 2003 to 2007.

The water for NISP will come from the Poudre and South Platte rivers on Colorado’s East Slope, but Northern Water’s existing system also uses water diverted from the Colorado River basin on the West Slope, and some of that water could be used in a system expanded by NISP. The Army Corps of Engineers has been leading the review of the project since 2004 and expects to release a decision document in 2016.

“Frankly, you’ve got a governor who can’t seem to decide if he’s for it [or] against it,” Beauprez said about NISP. “I’m for it. And I’ll do everything to make sure it gets approved and built.”

Given his enthusiasm for new reservoirs, Beauprez was asked by an audience member if he was proposing new transmountain diversions to augment the Front Range’s water supply.

“Where are you going to get the water from?” the questioner asked, noting that 80 percent of water in Colorado is on the Western Slope.

“What I’m proposing is the same kind of thing that NISP is doing — taking advantage of the opportunity to store East Slope water on the East Slope. I think until we’ve demonstrated that we’ve stored all the water we possibly can on the East Slope, transbasin diversions shouldn’t even be on the table.

Beauprez, who grew up on a dairy farm in Lafayette and now diverts water to grow alfalfa and raise buffalo in Jackson County, said he has a keen appreciation for Colorado water law and will defend the state’s priority system, which is based on “first in time, first in right.”

“I know what Colorado’s time-honored water laws are for,” he said “I know that our prior appropriations doctrine has worked, and worked very, very well. And I know that there’s a lot of people that would like to gnaw away, erode, and destroy that. I’m not one of them. Our prior appropriations doctrine, our water law, and our right to own and utilize our water needs to be protected every day at all costs.”

Like a bolt of lightning, climate change clearly divides candidates in the Third Congressional District.U.S. Rep. Scott Tipton, a Republican, and his Democratic challenger from Pueblo, Abel Tapia were asked about it at the Colorado Water Congress summer convention.

“We all agree that climate will change,” Tipton said, quickly launching into campaign talking points on all-of-the-above energy policy.

But Tipton criticized the way some have politicized the issue and complained of governmental overreach by the Environmental Protection Agency and other federal departments.

“Anyone who doesn’t believe in climate change is fooling themselves,” Tapia said later in the day. “When you look at the forest fires and floods we have experienced, something has added to that.”

Tapia said the country has the ability and obligation to discover ways to overcome the effects of climate change to keep the county and world secure.

Tipton also stressed his record in Congress on water issues, citing his efforts to stop the National Forest Service from tying up water rights in federal contracts for ski areas and ranch land.

He said the EPA’s Waters of the [U.S.] policies are dangerous to agriculture.

“If the EPA can come in and tell us how to use water, we’re going to be stripping our farmers of their ability to make a living,” he said. “We need common sense in federal regulations.”

Tapia said his own life experiences as an engineer, school board member and state lawmaker give him a unique perspective that would serve the state in Congress.

“I’m a problem solver,” he told the Water Congress. “I know that when you need to know something you go to the experts. You are the experts on water.”

Tweets from the conference were tagged with the hash tag #COWaterRally.