Montrose County on Thursday nabbed a significant award from the Colorado Water Conservation Board, which unanimously approved a combined total of $300,000.

The money from the state’s Water Supply Reserve Account will be used to help fund a feasibility study of up to four possible reservoir sites on the West End. The county will spend $966,000 on the study, which was included in its annual budget.

The conservation board, as part of its Montrose meeting, awarded approval of the funds on the condition that some of the money be spent to assess the effect each proposed site will have on recreational uses, especially rafting, on the San Miguel River.

The county is glad to comply with the condition, and would have noted that on its application had the form allowed for it, Marc Catlin, Montrose County’s water rights manager, told the board.

“If there’s going to be a future on the West End, those people are going to need water,” Catlin said.

The county needs to determine where and how reservoirs would be built to impound the water it secured under a 2012 water rights decree.

“It’s the result of two and a half years of hard work and paying attention to detail, wanting to do the right thing,” Montrose County Commissioner Ron Henderson said later on Thursday.

“It’s finally starting to pay off. It’s just a really nice thing for the West End of Montrose County, actually, the whole county, but most especially the West End.”

Montrose County in a controversial move previously filed for water rights on a 17.4 stretch of the San Miguel. Under settlements reached, the county agreed to a volumetric use limitation of 3,200 acre-feet. An acre-foot is roughly the amount of water it would take to cover a football field at a depth of 1 foot.

Conditions of the water right decree include a means of capturing and impounding the water. The county, which is considering four possible sites for a reservoir, needs to know the best place to site it and therefore applied for funding to offset feasibility study costs.

It sought $50,000 from the Southwest Water Board and $250,000 from statewide accounts, both to be approved by the conservation board.

April Montgomery, a conservation board member representing the San Juan and San Miguel basins, on Thursday commended the county and Catlin for having been proactive.

“I think it’s setting an example,” she said, referring to the county’s feasibility study. The county showed forethought in looking at multiple uses, Montgomery said.

“Storage is part of the answer for the future,” Catlin later told the Daily Press. “The state’s moving toward multiple use. I think this is the first project that is investigating multi-use at the feasibility stage.

“It’s a good thing for the community.”

Ouray County also won funding, $50,000, from the board. The money will help fund the upper Uncompahgre Basin water supply protection and enhancement project.

A call on water in 2012 served as a wakeup call, Ouray County Attorney Marti Whitmore told the board. That dry year brought to the forefront the need to plan for accommodating needs, while also sustaining agriculture and tourism, industries that are part of Ouray County’s economic backbone, she indicated.

Whitmore said she anticipates that Ouray’s study will show a need for additional water storage.

The San Miguel River near its headwaters in Telluride, Colorado. @bberwyn photo. 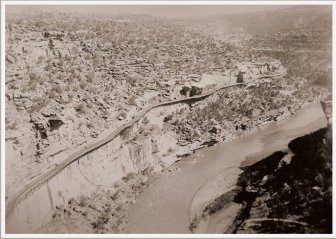 The Hanging Flume back in the day