Here’s an in-depth report from Naomi Klein writing for the Intercept. Click through and read the whole article, and resolve to accelerate your efforts to mitigate the Climate Crisis. Here’s an excerpt:

…for large parts of North America, Europe, and Africa, this summer has not been about water at all. In fact it has been about its absence; it’s been about land so dry and heat so oppressive that forested mountains exploded into smoke like volcanoes. It’s been about fires fierce enough to jump the Columbia River; fast enough to light up the outskirts of Los Angeles like an invading army; and pervasive enough to threaten natural treasures, like the tallest and most ancient sequoia trees and Glacier National Park.

For years, climate scientists have warned us that a warming world is an extreme world, in which humanity is buffeted by both brutalizing excesses and stifling absences of the core elements that have kept fragile life in equilibrium for millennia. At the end of the summer of 2017 — with major cities submerged in water and others licked by flames — we are currently living through Exhibit A of this extreme world, one in which natural extremes come head-to-head with social, racial, and economic ones.

I checked the forecast before coming to British Columbia’s Sunshine Coast, a ragged strip of coastline marked by dark evergreen forests that butt up against rocky cliffs and beaches strewn with driftwood, the charming flotsam from decades of sloppy logging operations. Reachable only by ferry or floatplane, this is the part of the world where my parents live, where my son was born, and where my grandparents died. Though it still feels like home, we now only get here for a few weeks a year.

The government of Canada weather site predicted that the next week would be glorious: an uninterrupted block of sun, clear skies, and higher than average temperatures. I pictured hot afternoons paddling in the Pacific and still, starry nights.

But when we arrive in early August, a murky blanket of white has engulfed the coast and the temperature is cool enough for a sweater. Forecasts are often wrong, but this is more complicated. Somewhere up there, above the muck, the sky is clear of clouds. The sun is particularly hot. Yet intervening in those truths is a factor the forecasters did not account for: huge quantities of smoke, blown up to 400 miles from the province’s interior, where about 130 wildfires are burning out of control.

The smoke has created its own weather system, powerful enough to transform the climate not just where we are, but in a stretch of territory that appears to cover roughly 100,000 square miles. And the smoke, a giant smudge on the satellite images, respects no borders: not only is about a third of British Columbia choked, but so are large parts of the Pacific Northwest, including Seattle, Bellingham, and Portland, Oregon. In the age of #fakenews, this is #fakeweather, a mess in the sky created, in large part, by toxic ignorance and political malpractice.

From the Associated Press (Dan Elliott):

HOW DID WE GET HERE?

Heavy snows last winter brought relief from a long, brutal drought across much of the West and produced a lush growth of natural grasses — thicker and taller than many vegetation experts had ever seen. But the weather turned very hot very fast in the spring, and the snow melted much faster than expected.

All the grass that grew high dried out, and so did forests at higher elevations, leaving plenty of fuel for wildfires, said Bryan Henry, a manager at the National Interagency Fire Center, which coordinates wildfire-fighting.

Summer lightning storms then dumped less rain than usual and weather conditions kept the humidity low, creating a natural tinderbox in many states…

HOW BIG ARE THE FIRES?

By Thursday, more than 76 large fires were burning in nine Western states — including 21 in Montana and 18 in Oregon, according to the interagency fire center.

So far this year, wildfires have burned more than 12,500 square miles (32,000 square kilometers) nationwide. In the past decade, only two years were worse at this point in the wildfire season: 2015 and 2012.

WHAT ABOUT CLIMATE CHANGE?

It’s making things worse for fires, said Jonathan Overpeck, dean of the School for Environment and Sustainability at the University of Michigan.

Hotter and drier weather is a symptom of human-caused climate change, and that’s making fires worse by leaving forests and other vegetation more flammable…

“It’s not of course playing the only role,” he said. “There’s natural variability at work.”

“Humans are contributing to an ever-increasing degree to wildfires in the West as they emit greenhouse gases and warm the planet and warm the West,” Overpeck said.

Two dozen species of beetles have killed trees on nearly 85,000 square miles (220,000 square kilometers) in the Western U.S. since 2000. They’re responsible for about 20 percent of the 6.3 billion standing dead trees across the West, according to the U.S. Forest Service.

Researchers disagree on whether forests with beetle-killed trees are more likely to burn, or if they burn differently, than healthier forests.

Any standing dead tree — whether killed by beetles, drought, lightning or other causes — can crash down, posing hazards for firefighters who must adjust their tactics to avoid them…

HOW BAD ARE THE LOSSES?

Nine firefighters have died and 35 have been injured this year, according to the national Wildland Fire Lessons Learned Center. Two of the deaths came during training.

Janet Ruiz of the Insurance Information Institute sees a hopeful trend in fewer houses lost to wildfires in recent years. Ruiz credits better-equipped firefighters and homeowners who take steps to minimize the danger such as clearing trees away from buildings and installing screens over dwelling openings to keep embers out…

HOW MUCH HAS FIREFIGHTING COST?

Federal spending to fight fires appears to be headed for a record.

The two main firefighting agencies, the U.S. Forest Service and the U.S. Department of Interior, report spending of more than $2.1 billion so far. That’s about the same as they spent in all of 2015, the most expensive wildfire season on record.

Those figures do not include individual state spending, which no single agency compiles. Montana has spent $50 million, exhausting its firefighting reserve fund in just over a month. Oregon has spent $28 million, but the state expects to be reimbursed for part of that by the federal government and others…

DON’T SOME FIRES HELP THE ENVIRONMENT?

Yes. Fires can burn away undergrowth, preventing buildups of flammable vegetation that can make big fires even worse. They can also help some forests and grassland rejuvenate.

But very hot fires can damage the soil and make it water-resistant, which produces heavy runoff during rainstorms and snowmelt, which in turn can cause severe erosion, mud slides and floods.

Silt from fire-damaged valleys can clog streams, which kills fish.

The silt can also settle to the bottom of reservoirs, taking up space needed to store drinking water and forcing utilities to spend heavily to dredge it out. 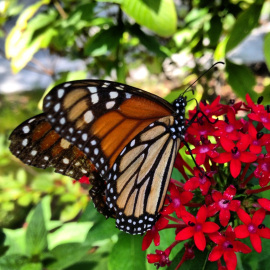 Monarch butterflies in the western U.S. have declined even more dramatically than believed, putting the population at risk of extinction, according to new research. In As recently as the 1980s, about 10 million monarchs over-wintered in coastal California, but today that’s down to about 300,000, said Cheryl Schultz, an associate professor at Washington State University Vancouver, who led the study, published last week in the journal Biological Conservation. 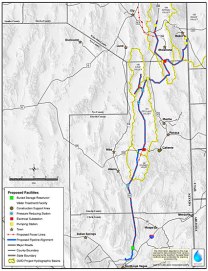 A federal court has at least temporarily stifled a major water grab in Nevada, finding that the Bureau of Land Management didn’t adequately study and disclose impacts from groundwater pumping scheme by Las Vegas. At issue are losses of wetlands and wildlife habitat that would result from the Southern Nevada Water Authority’s massive groundwater pipeline development project.

The court ruled that the BLM violated federal environmental laws by failing to demonstrate how it would compensate for the destruction of thousands of acres of wetlands and sensitive habitat in eastern Nevada.