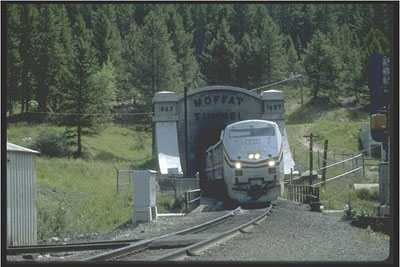 The Town of Winter Park scheduled a meeting in Denver with the EPA (Environmental Protection Agency), participants from Grand County, CDPHE (Colorado Department of Public Health and Environment), UPRR (Union Pacific Railroad), CDM Smith (UPRR’s consultant), Winter Park Ranch and HRS Water Consultants, Inc. on November 21. The meeting was to address the Class V injection well permitting process regarding the permit that will be submitted by the UPRR for a well near the Moffat Tunnel.

According to Lisa McClain-Vanderpool, Public Affairs Officer for the EPA the purpose of the meeting was to educate the parties on the Class V well permitting process and discuss issues associated with the wastewater treatment plant project for discharges from the Moffat Tunnel to the Fraser River. EPA’s UIC (Underground Injection Control) Class V program has authorized the construction of an onsite waste water system for domestic waste. UPRR will submit a Class V permit application for its wastewater treatment facility. Additional sanitary waste would be dumped into the system as well.

Winter Park Town Manager Drew Nelson said, prior to the meeting, that with the nature of the soils in the area, the Town is concerned that contaminants could easily move between the septic and leach field into the Fraser River. The meeting was not held to address the contaminants seen discharging into the Fraser River in September, but only concerned waste materials generated by the new water treatment facility. The facility has been under construction for the last few years.

Morris submitted an update memo stating that the treatment plant has a bathroom and faucet needing treatment, and will produce a certain amount of centrate waste from the plant waste treatment process that needs to be dealt with appropriately. UPRR applied to Winter Park Water and Sanitation District (WPWSD) to accept the waste stream and was granted a variance from the compulsion to connect because the waste will be classified “industrial” and would require reopening WPWSD’s permit and likely redesign of the plant. UPRR then applied to the county for Class V injection permit, which is essentially an OWTS (On-site Water Treatment System). The OWTS was declined because it would include industrial rather than solely domestic waste. Morris said Grand County Water had several concerns about the new application. She said it is unclear if the plant has a source of potable water for the restroom. Because there is no acknowledgment yet in the discharge permit of the organic contamination within the discharge, to the county’s knowledge, the plant was not designed to treat organics, and it is unclear how much of a threat the organics pose. The update states it is not clear what will be the fate and transport of organics through the treatment process, and they don’t know how much of the organic pollutants will end up in the centrate that is destined for the OWTS. Morris referenced the discharge from the Moffat Tunnel in September, stating that events like that are likely to overwhelm the plant. The update asked: if an OWTS is approved, what oversight will there be to ensure that highly concentrated discharges are actually processed through the plant? And is an OWTS adequate to the task of safely breaking down any organics that survive treatment, or will they just concentrate in the vault or travel by groundwater through the relatively close connection to the Fraser River?

WHAT IS A CLASS V INJECTION WELL?

According to the EPA website, a Class V well uses injection techniques different from those used by wells in other classes. Some Class V wells are technologically advanced disposal systems, but most are low-tech holes in the ground. A typical Class V well is shallow and relies on gravity to drain or inject waste into the ground, which is often directly into, or above, an underground source of drinking water. Class V wells are used to inject non-hazardous fluids underground. Most are used to dispose of waste into or above underground sources of drinking water. This disposal can pose a threat to ground water quality if not managed properly.

The EPA has established minimum requirements to prevent injection wells from contaminating underground sources of drinking water. According to the EPA website, in most cases Class V wells are authorized by rule—meaning they may be operated without a permit as long as the owners or operators abide by a set of regulations:

Operate the wells in a way that does not endanger drinking water.

The process for a Class V application relies on public input, according to McClain-Vanderpool.

The UIC program will draft a permit and submit it for a 30-day public notice on their website and in the local newspaper.

If no comments are received, the UIC unit will finalize the permit and issue it. If they get public comment, they will consider the comments for their decision.

The timeline depends on the complete application and the public notice response.

The UIC unit cannot estimate a timeline for this process, according to McClain-Vanderpool.

Click here to read the report. Here’s the abstract:

To evaluate the influence of military training activities on streamflow and water quality, the U.S. Geological Survey, in cooperation with the U.S. Department of the Army, began a hydrologic data collection network on the U.S. Army Garrison Fort Carson in 1978 and on the Piñon Canyon Maneuver Site in 1983. This report is a summary and characterization of the precipitation, streamflow, and water-quality data collected at 43 sites between October 1, 2012, and September 30, 2014 (water years 2013 and 2014).

Trilinear diagrams were used to classify water type based on ionic concentrations of water-quality samples collected during the study period.

At the U.S. Army Garrison Fort Carson and the Piñon Canyon Maneuver Site, 27 samples were classified as very hard or brackish. Seven samples had a lower hardness character relative to the other samples. Four of those nine samples were collected at two U.S. Geological Survey stations (Turkey Creek near Fountain, CO, and Little Fountain Creek above Highway 115 at Fort Carson, CO), which have different geologic makeup. Three samples collected at the Piñon Canyon Maneuver Site had a markedly lower hardness likely because of dilution from an increase in streamflow.

[On] November 29, 2016, NOAA’s GOES-R satellite executed its final liquid apogee engine burn without anomaly. This has placed the satellite approximately 22,000 miles away with an inclination of 0.0 degrees, meaning it has reached geostationary orbit. GOES-R is now GOES-16!

Later today, GOES-16 will perform its second stage solar array deployment, releasing the solar array yoke and solar pointing platform. In the days that follow, the software will be transitioned from the ‘orbit raising’ mission phase to ‘operational,’ several maneuvers will be conducted to adjust the satellites precise orbit, and the magnetometer boom will be deployed. Testing and calibration of GOES-16 will then begin.

There comes a moment each time I bake a pie when the thought flashes through my mind. It can be when I’m rolling out the crust praying I don’t rend the delicate dough, when I’m scraping the gooey seeds from a gourd, or when I’m pinching lopsided designs into the pie edge hoping they don’t fall over.

Playing Go Fish is easy. Watching Harry Potter movies is easy. Lying in a hammock is easy. Pie, however, is decidedly not easy. At least not this kind of pie, my mom’s pumpkin pie. It’s a two-day process, at least, one that mandates a 500-mile transport of an orange globe, several kitchen gadgets and a good dose of patience.

But god is it sublime. So much that I return to the recipe year after year. It’s a Thanksgiving dish I…

It’s finally starting to look a lot like winter in the Colorado Rockies — just a little later than normal. Mother Nature delivered some much-needed snow at the end of November to boost a ski season that’s been dealing with warmer temperatures and limited snow this fall.

Luckily, ski runs have a solid base waiting for fresh powder, thanks to snowmaking and a helping hand from Denver Water.

Resorts typically rely on early-season snowmaking to cover the slopes. In years when Mother Nature is slow to deliver, snowmaking operations are even more critical to the ski industry.

From Montezuma County via The Cortez Journal:

Trail of the Ancients National Scenic Byway, Montezuma County and the Colorado Department of Transportation will host a dedication of the McElmo Flume Overlook at 11 a.m. on Monday, Dec. 5.

Transportation to the site is by shuttle bus from the Montezuma County Fairgrounds.

A local landmark from the last century, the flume can now be seen from viewing platform at a new highway rest stop off U.S. Highway 160 east of Cortez. The turnout includes informational panels about water and irrigation in our county.

There will be numerous speakers at the dedication. Susan Thomas, of the Trail of the Ancients Byway, will give welcoming remarks; Terry Knight of the Ute Mountain Historic Preservation Office, will conduct a blessing of the site; Les Nunn, of the Montezuma Valley Irrigation Co. (retired), and Linda Towle, of the Cortez Historic Preservation board, will tell the history of local irrigation; Mike Preston, of the Dolores Water Conservancy District, will tell the modern irrigation story; and James Dietrich, federal lands coordinator for Montezuma County, will discuss the next preservation steps for the 125-year irrigation structure.