From The Durango Herald:

A flood advisory has been issued for the La Plata River near Hesperus as rising temperatures and increasing snowmelt have pushed the river toward flood stage.

The National Weather Service in Grand Junction said flows along the La Plata River will remain near to slightly above the bank throughout the rest of the week, with the possibility for minor lowland flooding.

As of 7 a.m. Tuesday, a river gauge measured the flow of the La Plata River at 5 feet. A flood stage for the waterway is considered 5½ feet…

The Animas River in Durango was flowing at about 1,500 cubic feet per second Saturday. As of Tuesday morning, the river had reached more than 5,000 cfs and is expected to peak around 7,000 cfs later in the week.

Butch Knowlton, director of La Plata County’s Office of Emergency Management, said Monday that the Animas River begins to spill out onto some areas of the Animas Valley around 7,000 cfs. 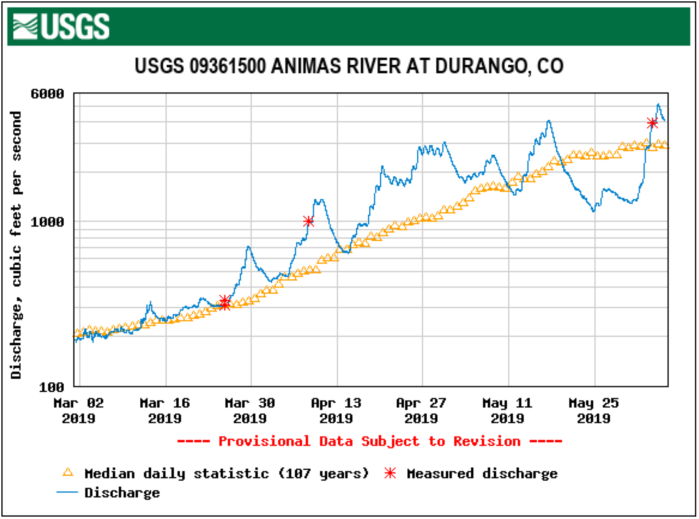 From The Durango Herald (Jonathan Romeo):

The Animas River…was at about 1,500 cubic feet per second Saturday. On Tuesday, the river was running at more than 5,000 cfs and is expected to keep rising.

By the end of the week, the Colorado River Basin Forecast Prediction Center is calling for the Animas to hit nearly 7,000 cfs. (The Animas River usually hits a peak flow of about 4,700 cfs in early June at the height of spring runoff.)

The Animas River at 7,000 cfs starts to spill out on the low-lying areas and fields in the lower Animas Valley north of Durango, Knowlton said. At 8,000 cfs, areas around Trimble Lane start to flood.

The water flow for the Animas River to be considered in a flood stage is about 10,500 cfs, Knowlton said. While the river may not hit that mark this year, there is a wild-card type scenario that has emergency managers concerned. 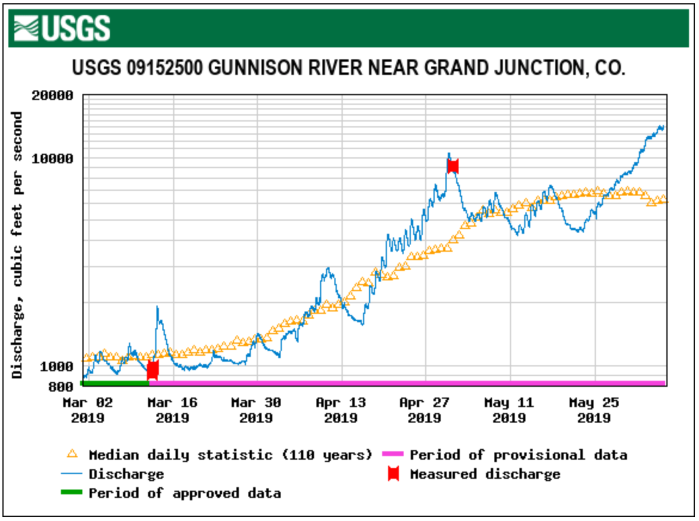 The National Weather Service has issued a river flood advisory for the Gunnison River in Mesa County. Water flows are expected to increase throughout the week.

“Some may start to get above bank full by this weekend. But it’s just something we’re monitoring. It’s not a sharp increase where we expect to see flooding in a couple of days. We are starting to see runoff and an increase in higher flows and higher levels,” said Matthew Aleksa, National Weather Service Grand Junction.