Posting may be intermittent. I’ll for sure be back on Monday, March 9th.

Click on a thumbnail graphic to view a gallery of drought data from the US Drought Monitor. 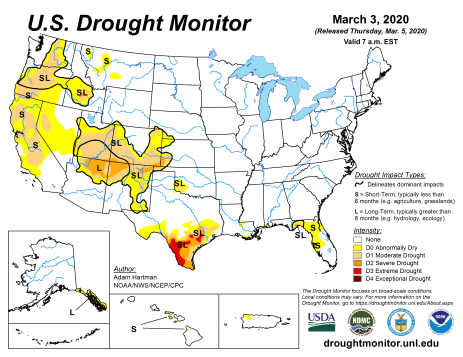 The pattern has been less active over the CONUS over the past 7 days, with high pressure dominating over much of the western CONUS. Storm systems riding up and over the Pacific ridge resulted in some precipitation in the Pacific Northwest, but not enough to alleviate the dryness there, particularly for Oregon. Meanwhile a low-pressure system propagated northeastward along the East Coast and out of the domain early in the period, adding to surpluses in the Tennessee and Ohio Valleys. Drought continued to expand in the West, as dry conditions persisted over much of the region. Parts of Oregon and California saw increases in D0 and D1 coverage, while areas of D0 were expanded slightly in Montana. There was some D1 added to northeastern areas of Colorado (High Plains Region), as the past 60 days have seen drier than normal conditions. Drought intensification and expansion also continues in southern Texas (Southern Region), in association with continued dryness, low humidity, and high winds over the past week. The Midwest and Northeast continue to remain as is for now, as 90-day precipitation surpluses are widespread across many of these areas, with other areas near normal. Some D0 reduction in southern Georgia (Southeast Region) was made due to recent heavy rainfall. However, the Florida Peninsula saw some D0 expansion north and east of Tampa, with year-to-date (YTD) precipitation estimates between 25 and 50 percent of normal…

Some D1 was added over northeast Colorado with YTD precipitation 50 to 65 percent of normal. Stream flows were also running well below normal for this area. Recent ground observations support this addition of D1. SPIs over several time periods also show deterioration. The rest of the High Plains Region has long-term surpluses of precipitation. No D0 development expansion was made elsewhere…

Westward D1 expansion into the San Francisco Bay area and Mendocino County, northward D1 expansion into Trinity and Shasta Counties, and southwestward D1 expansion into San Luis Obispo County in California was warranted in association with the continuance of a much drier-than-normal water year to date (since October 1, 2019; WYTD). Many areas are seeing WYTD precipitation of 25 to 50 percent of normal and YTD precipitation 10 to 25 percent of normal. Some locations near San Francisco saw no precipitation for the month of February. However, reservoir levels are in good shape overall across California, despite the below normal snowpack. In addition, there have been several reports of non-managed creeks and streams running dry and severe lack of vegetation, resulting in producers supplementing feed for livestock. In addition, much of the state has seen above normal temperatures over the past week, further exacerbating the dryness and reducing longevity of existing snowpack. D1 was also expanded in central and southwestern Oregon, as stream flow conditions have continued to deteriorate, precipitation was lacking, and snowpack was below normal. Many unregulated rivers have fallen below the 10th percentile (much below-normal). WYTD precipitation deficits are greater than 12 inches across much of southwestern Oregon, including coastal areas. In contrast, Washington’s March 3 basin average SWC was above normal, and has received above normal precipitation over the past 30 days, mainly concentrated in areas with no drought, but this added to the snowpack and near-normal stream flows in drought areas, leading to status quo this week. The Four Corners Region is also status quo this week as the last 14 days has seen enough precipitation to prevent deterioration, but not enough for improvement. Some D0 expansion in Montana in favor of the 90 day SPI. Some D1 expansion in western Utah into Millard County, which has seen 5 to 10 percent of normal precipitation over the past 90 days…

Drought intensification over southern Texas continued, along with expansion into adjacent coastal areas. Stream flows are below normal for many areas, and recent high winds and low humidity have enhanced surface soil moisture loss. YTD percent of normal precipitation was 25 to 50 percent for much of southern Texas, with less than 10 percent along the Rio Grande Valley. This is on top of receiving essentially no precipitation over the past 30 days, and beyond, for many areas south of the I-10 corridor. D0 remains for portions of the immediate Gulf Coast in Louisiana, Mississippi, and Alabama this week, although dryness has crept northward in these areas with the sharp north-south precipitation gradients in recent weeks…

During the next 5 days (March 5-9), heavy rain will be exiting the Southeast early in the period, leaving behind an estimated 1.5 to 3 inches of rainfall. Light to moderate precipitation is forecast along coastal areas of California, the Sierra Nevada, and the Four Corners Region later in the period. This energy is expected to transition to the central Great Plains by day 5, with estimates of greater than 0.5 inches centered just west of the Mississippi River. The 6-10 day (March 10-14) extended range forecast suggests a more transient pattern over the much of the CONUS (indicated by weak height anomalies and zonal flow), favoring above normal precipitation over much of the country. Enhanced probabilities for above normal precipitation are favored during the 6-10 day period over southern California and the Four Corners Region, in association with a potential mean trough propagating eastward underneath a Pacific ridge of high pressure. Meanwhile, an active storm track is favored to remain in place across Alaska, enhancing probabilities for above normal precipitation over much of the state during the extended range.

Here’s the one week change map.

And, just for grins, here’s a gallery of early March Drought Monitor maps.

Steve Lowe gazed into a gaping pit in the heart of the California desert, careful not to let the blistering wind send him toppling over the edge.
The pit was a bustling iron mine once, churning out ore that was shipped by rail to a nearby Kaiser Steel plant. When steel manufacturing declined, Los Angeles County tried to turn the abandoned mine into a massive landfill. Conservationists hope the area will someday become part of Joshua Tree National Park, which surrounds it on three sides.

Lowe has a radically different vision.

With backing from NextEra Energy — the world’s largest operator of solar and wind farms — he’s working to fill two mining pits with billions of gallons of water, creating a gigantic “pumped storage” plant that he says would help California get more of its power from renewable sources, and less from fossil fuels…

At Eagle Mountain, one of several abandoned mining pits would be filled with water, pumped from beneath the ground. When nearby solar farms flood the power grid with cheap electricity, Lowe’s company would use that energy — which might otherwise go to waste — to pump water uphill, to a higher pit.

When there’s not enough solar power on the grid — after sundown, or perhaps after several days of cloudy weather — the water would be allowed to flow back down to the lower pit by gravity, passing through an underground powerhouse and generating electricity…

The Eagle Mountain plant wouldn’t interrupt any rivers or destroy a pristine landscape. But environmentalists say the $2.5-billion facility would pull too much water from the ground in one of the driest parts of California, and prolong a history of industrialization just a few miles from one of America’s most visited national parks.

Lowe rejects those arguments, saying his proposal has survived round after round of environmental review and would only drain a tiny fraction of the underground aquifer.

The project’s fate may hinge on a question with no easy answer: How much environmental sacrifice is acceptable — or even necessary — in the fight against climate change?