Agriculture received the lion’s share of water from the Fryingpan-Arkansas Project this year, when an abundant water supply is expected to boost Arkansas River flows as well as imported water.

Allocations totaling 63,000 acre-feet were made by the Southeastern Colorado Water Conservancy District board on Thursday (May 16), with 48,668 acre-feet going to agriculture, and 14,332 going to cities. The district is the agency responsible for management of the Fry-Ark Project, which is operated by the U.S. Bureau of Reclamation.

“This is a remarkable outcome for the Arkansas River basin, given the dry conditions we faced last year,” said Garrett Markus, water resources engineer for the district. “The conditions look favorable during the next three months, when rainfall should add to the abundant snowpack already in the mountains.”

Water users in nine counties benefit from the supplemental water provided by the Fry-Ark Project, ranging from large cities in Pueblo and El Paso counties to irrigation companies in the Lower Arkansas Valley. Fry-Ark Project water accounts for about 10 percent of flows in the Arkansas River annually.

While cities are entitled to more than 54 percent of project water, their accounts in Pueblo Reservoir are relatively full, freeing up additional water for agriculture. Municipal allocations include:

In the event of changing conditions – a reduction of precipitation or rapid melt-off of snow – the District initially will release only 28,256 acre-feet of water to irrigation companies until final imports are certain, with the remainder delivered as soon as the expected total is reached. Municipal allocations would not be affected by a shortfall, because they are all below allocation limits.

Another 17,338 acre-feet of irrigation return flows were allocation, and 10,016 acre-feet will be initially released.

Reclamation estimates the project will yield 84,000 acre-feet this year, but deductions from that total are made for evaporation, transit loss and obligations to other water users reduce the amount of water available to allocate.

The Fry-Ark Project imports an average of about 56,000 acre-feet through its collection system in the Fryingpan River and Hunter Creek watersheds above Basalt. Water comes through the Boustead Tunnel into Turquoise Lake, through the Mount Elbert Power Plant at Twin Lakes and into terminal storage at Pueblo Reservoir.

Three-month projections from the National Oceanic and Atmospheric Administration predict cooler and wetter than average conditions for eastern Colorado. 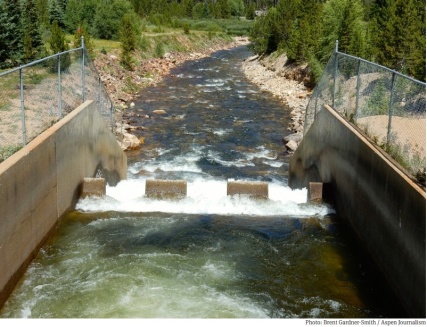 The outflow of the Bousted Tunnel just above Turquoise Reservoir near Leadville. The tunnel moves water from tributaries of the Roaring Fork and Fryingpan rivers under the Continental Divide for use by Front Range cities, and Pitkin County officials have concerns that more water will someday be sent through it. 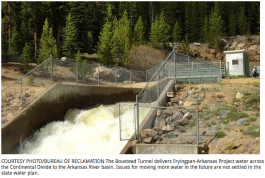 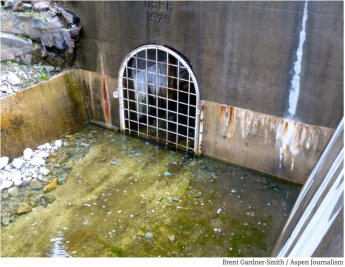 The end of the tunnel that brings water from Hunter Creek to the Fryingpan River drainage, and then on to the eastern slope. Photo credit: Brent Gardner-Smith, Aspen Journalism. 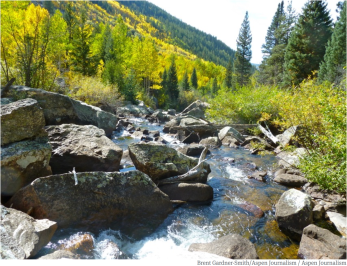 A portion of the flow in Hunter Creek is diverted to the Front Range and to locations downvalley from Aspen.