Click on a thumbnail graphic to view a gallery of drought data from the U.S. Drought Monitor. 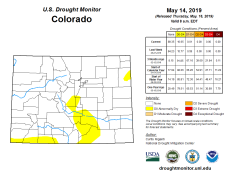 Precipitation over the past week in Colorado and New Mexico led to reduction of long-term precipitation deficits and improvement in conditions in southern Colorado and northern New Mexico. Moderate drought was completely removed from southern Colorado, and severe and moderate drought coverage was reduced in northwest New Mexico, where vegetation is prospering. A large area of long-term abnormal dryness also improved to normal conditions in south-central Colorado because of the continued precipitation. Abnormal dryness coverage in southwest Wyoming and northeast Utah was also reduced because of the effects of recent precipitation. Meanwhile, short- and long-term dry conditions, low streamflow, and high evaporative demand continue in western Washington, where moderate drought expanded to cover more of central and western Washington, including the coastal areas of the Olympic Peninsula…

This week, a strong jet stream with several embedded storm systems will move into the continental U.S. and will interact with copious amounts of moisture. Though the evolution of each of the storm systems remains in question, moderate to heavy rain is possible in parts of the Great Plains and Midwest from this weekend into next week, including in areas that have received heavy rain recently, in addition to a risk for severe storms. Moderate to heavy precipitation amounts are also forecast in the Sierra Nevada and in some other parts of the West as the storm systems move from west to east. Warmer temperatures are forecast to occur in parts of the Southeast from this weekend into early next week.